Netherlands had 29 shots at the goal against Malaysia in their first match of the Hockey World Cup. 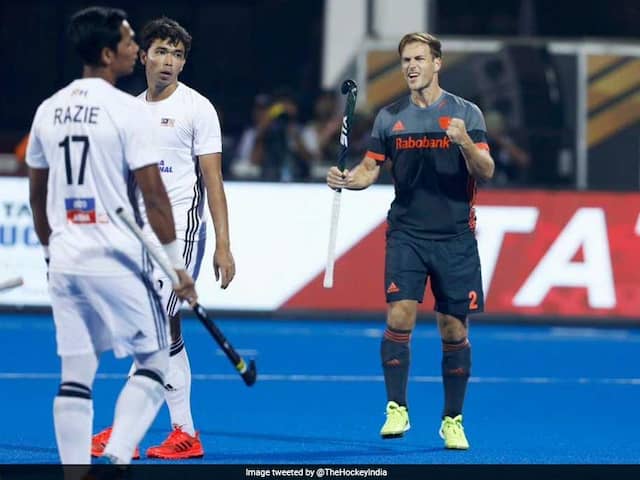 Riding on a hat-trick from Jeroen Hertzberger, the Netherlands defeated a listless Malaysia 7-0 in their opening Pool D match of the Hockey World Cup 2018 at the Kalinga Stadium in Bhubaneswar on Saturday. Hertzberger's goals in the 11th, 29th, 60th minute helped his team complete a lop-sided encounter with a massive win. Besides Hertzberger, Mirco Pruijser (21st), Mink van der Weerden (35th), Robbert Kemperman and Thierry Brinkman (57th) found the back of the Malaysian net. Asian Games silver medallist Malaysia, coached by legendary Dutchman Roelant Oltmans, were expected to give a tough fight but looked clueless against their higher-ranked opponent.

In the other match of the day, Olympic bronze medallist Germany edged past four-time champions Pakistan 1-0 in their opening Pool D match. Germany's Marco Miltkau (36th minute) produced the only goal of the tie.

Earlier in the first match, the Netherlands, eyeing a fourth World Cup title, scored goals at will.

The Netherlands created chances at will and if not for the veteran Malaysian goalkeeper Kumar Subramaniam's heroics, the margin of defeat could have been bigger for the Asian side.

Subramaniam hardly got any help from his defenders and was forced to make numerous saves. It was a horrendous display from the Malaysians in all departments of the game. There was hardly any co-ordination between their defenders, midfielders and forwards, which helped the Dutch to dominate the ball possession.

The gap in quality between the two sides can be gauged from the fact that Netherlands had 29 shots at the goal as compared to Malaysia's three.

Placed in the 'pool of death' because of the presence of three former champions in Netherlands, Germany and Pakistan, it could be a herculean task for Malaysia to make a comeback in the tournament after this heavy defeat.

Malaysia will next play Pakistan on December 5, while the Netherlands will be up against Germany.