Lewis Hamilton put on a clinical performance as he won the Turkish GP on Sunday to equal Michael Schumacher's record of seven F1 world titles. 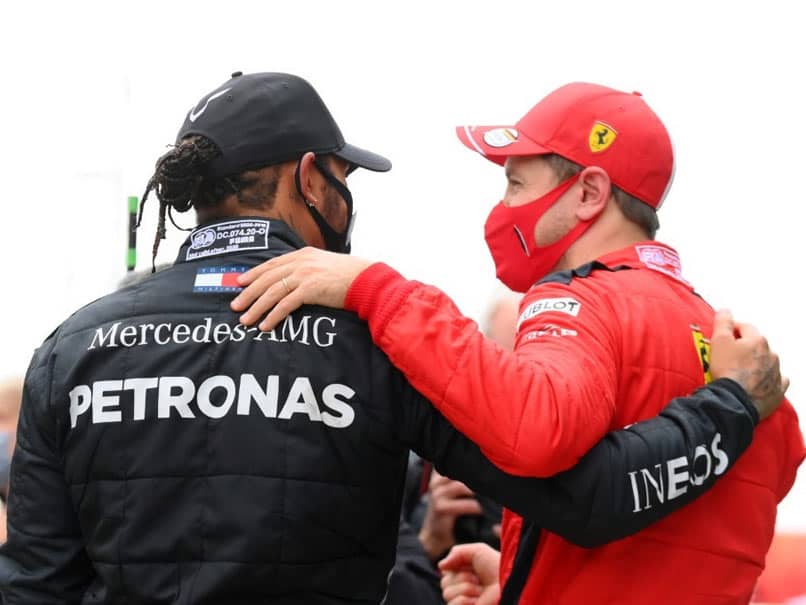 Lewis Hamilton and Sebastian Vettel both finished on the podium in Turkish GP on Sunday.© AFP

Lewis Hamilton, who drives for Mercedes in the Formula One, equalled Michael Schumacher's record of seven F1 world title wins on Sunday with a clinical performance in the Turkish GP on a tricky circuit. After the win, Ferrari's Sebastian Vettel, who himself has won four F1 world titles, congratulated Hamilton on equaling Schumacher's record. "We're witnessing you making history, man," Vettel told Hamilton after the end of the race at the Turkish GP.

In this season's driver's standings, Hamilton sits comfortably at the top with 307 points.

Behind him is his teammate from Mercedes, Valtteri Bottas who has 197 points next to his name.

On Sunday, Sergio Perez of Racing Point captured the second place while Vettel, who started the race from P11, also managed to finish on the podium with a thrilling final lap.

After his triumph at the Turkish GP, Hamilton said he is in great shape and is only getting started.

"Seven is unimaginable. There is no end to what we can do together, me and this team.

"I feel like I'm only just getting started. Physically, I'm in great shape," Hamilton said.

Hamilton, who sealed his first title in 2008, added to his unprecedented roster of records -- most wins with 94, most pole positions (97), most podium finishes (163) and most consecutive points finishes (47).

Hamilton's teammate Bottas had a forgettable outing on Sunday as he finished 14th.

Sebastian Vettel Turkish Grand Prix Formula 1
Get the latest updates on India vs Australia Series, check out the India vs Australia Schedule for 2020-21 and Ind vs Aus live score . Like us on Facebook or follow us on Twitter for more sports updates. You can also download the NDTV Cricket app for Android or iOS.