Organisers of the Formula One Korean Grand Prix announced big cuts in ticket prices on Wednesday to try to fill the stands this year after glitches with the inaugural event in 2010. 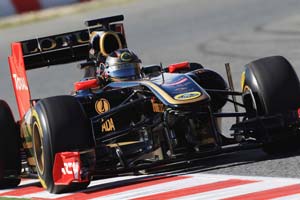 Organisers of the Formula One Korean Grand Prix announced big cuts in ticket prices on Wednesday to try to fill the stands this year after glitches with the inaugural event in 2010.

Last year's race went smoothly but organisers struggled to attract the crowds amid criticism of sloppy marketing and delays in work to complete the circuit.

Racegoers who buy tickets from April 1 to August 31 will get a further discount of up to 30 percent.

Organisers are also offering a 50 percent discount to schoolchildren and the disabled as well as to 10,000 fans who plan to buy tickets this month.

The F1 organising committee from South Jeolla province in the country's southwest, where the track in Yeongam county is sited, hopes to earn more than 40 billion won through ticket sales this year.

"We will do our best for perfect preparations this year," said provincial governor Park Joon-Young.

The inaugural race attracted about 170,000 visitors, but thousands were on free tickets and others were offered 50 percent discounts to fill seats.

The board of the Korea Auto Valley Operation (KAVO), a joint venture between a private company and the province, voted in January to fire chief executive Chung Young-Cho on the grounds of lax management.

Park vowed to ensure a better experience for fans this year, admitting that last year's event was not well prepared.

F1 committee officials conceded that big business groups had shunned sponsorship opportunities because of a lack of publicity and delayed work on the track.

Committee secretary general Park Jong-Moon said positive progress was made this year on negotiations about sponsorship and broadcasting rights.

Apart from the F1 problems, KAVO's reputation was damaged by the cancellation of an F3 event at Yeongam in November after inspectors questioned the safety of some facilities including mobile stands.

Barry Bland, director of British firm Motor Race Consultants, which organises the F3 race, wrote to KAVO last month saying he would consider taking the race to another country or suing for damages.

"It's difficult to hold the F3 event this year," Joo Dong-Sik, general director of the committee's planning department, told AFP, adding his committee would try to host other international races.

Comments
Topics mentioned in this article
Formula 1 Force India Korean Grand Prix
Get the latest updates on ICC T20 Worldcup 2022 and CWG 2022 check out the Schedule, Live Score and Medals Tally. Like us on Facebook or follow us on Twitter for more sports updates. You can also download the NDTV Cricket app for Android or iOS.