Toto Wolff was adamant that the triumphant Hamilton and his team-mate Valtteri Bottas will remain free to race each other. 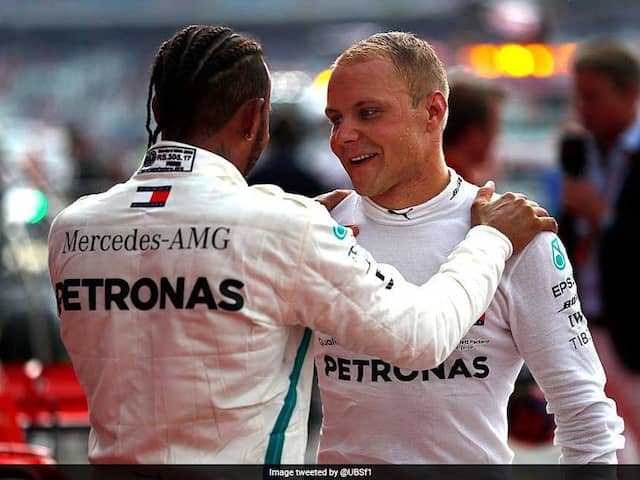 Lewis Hamilton and his team-mate Valtteri Bottas will remain free to race each other.© Twitter

Mercedes team chief Toto Wolff denied Monday that the use of team orders in Sunday's spectacular German Grand Prix signalled that Lewis Hamilton would be preferred as the number one driver. Wolff was adamant that the triumphant Hamilton and his team-mate Valtteri Bottas will remain free to race each other until late in the season when there might be championships decided by such decisions. "Racing is most important," said Wolff. "We always said if the championship goes into its last third, or last quarter, and there is a big difference between the drivers, then we might make these unpopular calls. "But it's much too early in the season to do this. We made it in order to bring a one and two home.... And we would have done it the other way around."

Bottas attempted to challenge and pass Hamilton for the lead in Sunday's rain-hit race following a Safety Car period after Sebastian Vettel crashed while leading for Ferrari.

The two Mercedes men battled side-by-side before Hamilton emerged in front and Mercedes intervened with a team radio message to 'hold position'.

Wolff said the message did not mean Hamilton, who declared his German win from 14th on the grid as the greatest of his career, was seen as favoured ahead of Bottas as a clear number one driver.

"No, absolutely not," he said. "If it had been the other way around, with Valtteri in the lead and Lewis second, we would have made the same call. Identical call. It was about bringing it home irrespective of who was in front."

Wolff added it was still raining at the time of the message and the team did not want to take any risks.

He said: "What I said to Valtteri is something that I would also say in the team. I would have done the same thing the other way around.

"This is the transparency we have in the team, that we wouldn't make a difference. It was important to score the double podium, the one and two, in order to recover some of the points which we lost through bad luck."

Hamilton's astonishing victory, hailed as the greatest of his career, lifted him 17 points clear of Vettel in the drivers' championship race after 11 of this year's 21 races. He is 66 ahead of fourth-placed Bottas.

"It is a very difficult call because on the one side you want to optimise the result and that is what you need to do, but on the other side you need to give both drivers a chance to win the race," said Wolff.

Ferrari had also used team orders when asking Kimi Raikkonen, who finished third, to allow Vettel to pass him for the lead.

Wolff said: "Kimi was unlucky in a few races at the beginning of the season, where the strategy went against him, and I think that Ferrari struggled to come up with the right call there. It's understandable."

Sunday's result meant the leadership in the championship changed again for the sixth time this season as the close 'fight for five' between Hamilton and Vettel remained so hotly-contested.

Hamilton said afterwards that he feared his lead might again be short-lived as the teams head to Budapest for this week's Hungarian Grand Prix, the last one before the European summer break.

"It's usually not our strongest track, but I'm hopeful it's not a power circuit," he said, referring to the dusty, tight and technical Hungaroring where chassis performance is important

"Hopefully this extra chunk of power that Ferrari have found doesn't serve them as well there and we have a decent fight..."