Sebastian Vettel On Pole In Germany, Setback For Lewis Hamilton

In front of a huge crowd of flag-waving Germans at the track near his Heppenheim birthplace, Vettel delivered a lap record in one minute and 11.212 seconds to top the Finn's 1:11.416. 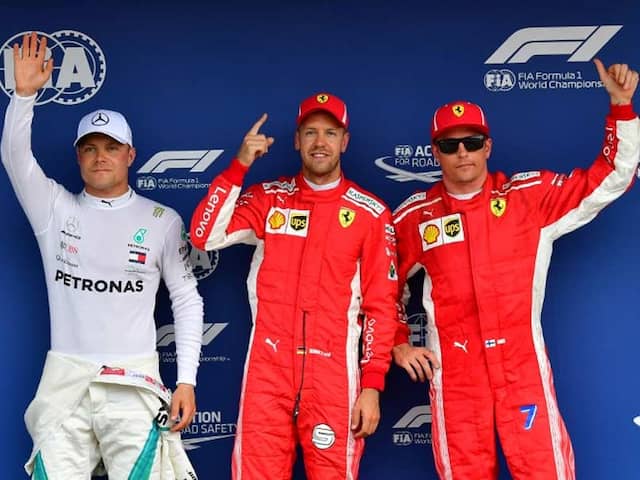 Sebastian Vettel surged to pole for his home German Grand Prix on Saturday as Lewis Hamilton suffered a setback when his Mercedes broke down to leave him at the back of the grid. Vettel topped qualifying with a devastating final lap in his Ferrari to pip Valtteri Bottas in the second Mercedes. A distraught Hamilton limped out in the first qualifying session when his car broke down with a hydraulics failure. Vettel rubbed salt in the British defending world champion's wounds by outpacing Bottas by two-tenths of a second. In front of a huge crowd of flag-waving Germans at the track near his Heppenheim birthplace, Vettel delivered a lap record in one minute and 11.212 seconds to top the Finn's 1:11.416.

"Thanks to those fans," said Vettel. "It was amazing to see so many Ferrari and Germany flags.

"It just kept getting better and I knew for the last lap I had a little bit more - I am full of adrenaline, but feel so happy."

It is his second pole for a German Grand Prix and the 55th of his career.

Vettel's qualifying success makes him favourite to land his first Formula One victory at Hockenheim and only his second Grand Prix win in Germany as he seeks to extend his eight-point advantage over Hamilton.

Kimi Raikkonen was third in the second Ferrari ahead of Max Verstappen of Red Bull and the two Ferrari-powered Haas cars of Kevin Magnussen and Romain Grosjean.

Hamilton, who had attempted to push his car to stay in contention, said: "It was definitely a tough one, but these things happen and all you can do is try and gather your thoughts and live to fight another day.

"I'll give everything tomorrow to see how high I can get up, but its not going to be like Silverstone."

Hamilton is expected to start 14th on the grid.

Valtteri Bottas Hockenheim German Grand Prix
Get the latest Cricket news, check out the India cricket schedule, Cricket live score . Like us on Facebook or follow us on Twitter for more sports updates. You can also download the NDTV Cricket app for Android or iOS.