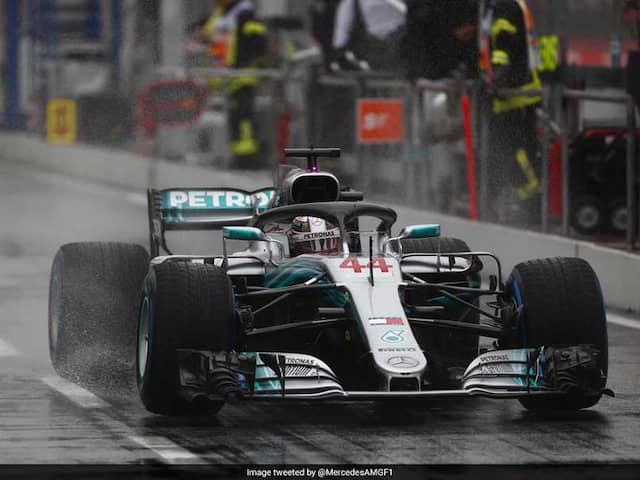 Lewis Hamilton danced in the rain on his way to a memorable pole.© Twitter

Lewis Hamilton danced in the rain on his way to a memorable pole Saturday ahead of his team-mate Valtteri Bottas as Mercedes secured a front row lockout for the Hungarian Grand Prix. The championship leading Briton, who is battling with Ferrari's Sebastian Vettel for a fifth drivers' world title, delivered another master-class in wet-weather driving and perfect timing. He chose to go for his final flying lap in the dying seconds of the session and grabbed pole with a lap that produced his team's fourth lockout of the season. Six days after his epic drive from 14th on the grid to win the rain-hit German Grand Prix last Sunday, he claimed his sixth pole in Hungary, his fifth this year and the 77th of his career.

"Are we good?" Hamilton asked his team over the radio. "We're good," came the reply.

"It's great for the team to have a one-two," added Hamilton. "Jeez. We couldn't have expected this. The heavens opened and it was fair game..."

Bottas was second ahead of fellow-Finn Kimi Raikkonen and his Ferrari team-mate Vettel, Carlos Sainz of Renault and Pierre Gasly of Toro Rosso.

Max Verstappen was seventh for Red Bull ahead of New Zealander Brendon Hartley, who made the top ten for the first time in his Toro Rosso, Kevin Magnussen and his Haas team-mate Romain Grosjean.

Hamilton leads Vettel by 17 points in the world championship. After Hungary, F1 takes its mid-summer breather, returning at Spa-Francorchamps at the end of August.