Neymar appeared to hit a fan on the chin following PSG's shock defeat to Rennes in the French Cup final. 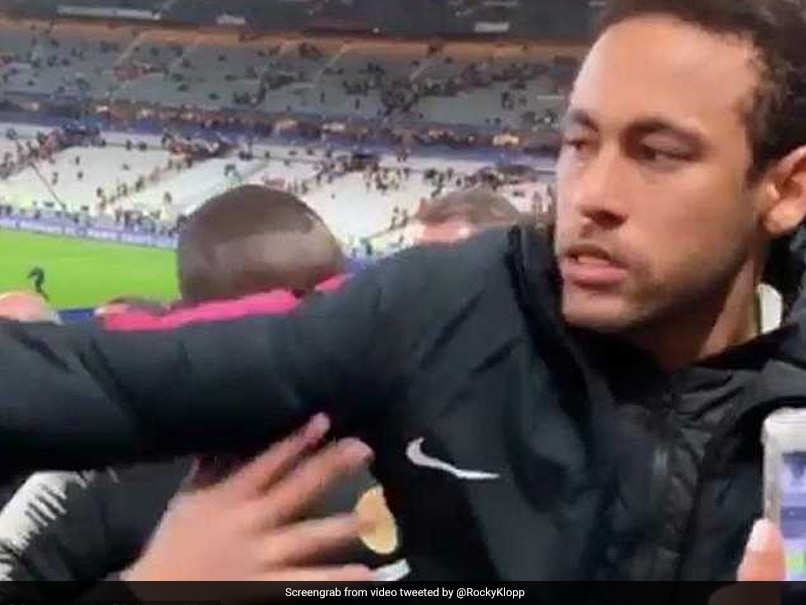 Neymar landed himself in hot water after he was filmed lashing out at a fan.© Twitter

Neymar has found himself in hot water again as a video emerged in which the Brazilian star appeared to hit a fan in the face following Paris-Saint Germain's shock defeat to Rennes in the French Cup final on Saturday. The former Barcelona star was walking up the stairs at the State de France to collect his losers' medal when one fan, holding a camera, said a few words to the Brazilian. Neymar seemed to take offence to whatever was said, using his hand to push the fan's phone away and appearing to hit him in the face.

The entire incident was caught from multiple angles, many of which went viral on Twitter and Instagram.

Neymar punches a fan after PSG lose to Rennes. What a disgrace. pic.twitter.com/lHNF94GNrt

Footage also surfaced which seemed to be taken from the phone of the fan that Neymar had lashed out against.

Anyone actually know what this guy said to Neymarpic.twitter.com/DIIEwku3E6

On the field, Neymar had a decent outing, scoring on his first start in three months after injury.

Dani Alves and Neymar gave Ligue 1 champions PSG a 2-0 lead midway through the first half. But Rennes staged a brilliant comeback to draw level as the match ended 2-2 at the end of extra time.

Paris-Saint Germain went on to lose 5-6 on penalties as PSG substitute Christopher Nkunku blazed his sudden-death spot-kick over the bar in the shootout.

Neymar's latest scandal comes after the Brazilian star was suspended for three Champions League matches by UEFA on Friday for a foul-mouthed tirade at match officials following Paris Saint-Germain's shock exit from this season's tournament to Manchester United.

The Brazil star missed the 3-1 Champions League second leg last 16 defeat on March 6 through injury, but told match officials "to go fuck yourselves" on social media after watching on from the sidelines at the Parc des Princes.

Neymar was found guilty of "insulting/molesting acts against match official", European football's governing body announced in a statement after opening an inquiry into his outburst on March 22.

Brazil Neymar Football
Get the latest updates on Fifa Worldcup 2022 and check out  Fifa World Cup Schedule, Stats and Live Cricket Score. Like us on Facebook or follow us on Twitter for more sports updates. You can also download the NDTV Cricket app for Android or iOS.