Paris Saint-Germain were stunned by Rennes in Saturday's French Cup final, losing 5-6 on penalties after a dramatic game finished 2-2 at the end of extra time. 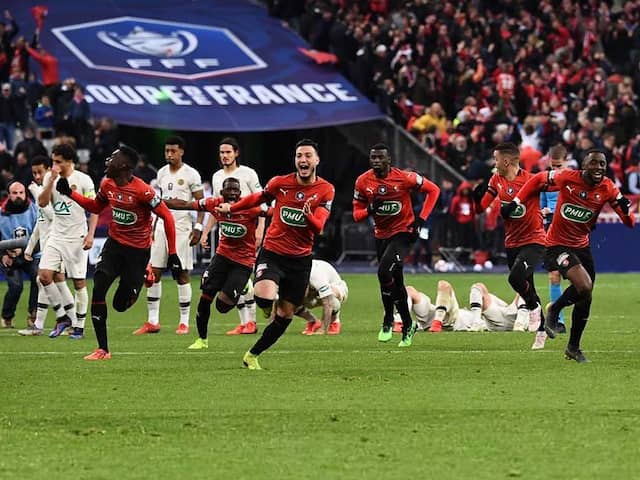 Kylian Mbappe was sent off for a shocking tackle late in extra time as Paris Saint-Germain were stunned by Rennes in Saturday's French Cup final, losing 5-6 on penalties after a dramatic game finished 2-2 at the end of extra time. PSG substitute Christopher Nkunku blazed his sudden-death spot-kick over the bar in the shootout, sparking scenes of joy among the Rennes fans at the Stade de France as they won a first trophy in almost half a century. "It has been talked about enough at the club in the last few weeks for us to realise that we have achieved something historic," said Rennes coach Julien Stephan.

It was a remarkable comeback from the Brittany side, who had seen Dani Alves and Neymar give Ligue 1 champions PSG a 2-0 lead midway through the first half.

Thomas Tuchel's side appeared poised to wrap up a domestic double, but Presnel Kimpembe's own goal just before the break gave Rennes hope and Edson Mexer headed them level in the 66th minute to take a gripping final -- attended by President Emmanuel Macron -- to extra time.

Penalties were already looming when Mbappe, who endured a frustrating evening, was shown a straight red card by referee Ruddy Buquet for a dreadful challenge on Damien Da Silva. The France star caught the Rennes defender on the knee with his studs, and can expect a lengthy ban.

"He had a slight muscle injury yesterday, he stopped training early and went to hospital for tests. Maybe that was in his head," said Tuchel.

"You got the feeling he was lacking confidence and didn't feel free. The red card at the end, it's not him."

Without him, PSG fell short of winning the Cup for the fifth year running, and of securing the double in Tuchel's first season in charge, which will also be remembered for the Qatar-owned club's Champions League exit to Manchester United in the last 16.

"I am sad," said Neymar. "We weren't quite up to it, but there is no point crying about it now. There is nothing we can do."

They had been looking to win the Cup for the fifth year running, but instead it is traditional underachievers Rennes -- owned by luxury goods mogul Francois Pinault, one of France's richest men -- who celebrate a famous victory.

It is their first silverware since the 1971 French Cup and also means a return to the Europa League next season.

Neymar back among goals

Few of their fans would have imagined that possible after the way they started, with PSG looking more like their former selves as Neymar made his first start in three months after injury.

Rennes had been knocked out of this competition following heavy defeats by PSG in each of the last two seasons, and another hiding looked on the cards as they went 2-0 down early on.

The opener came in the 13th minute when a corner fell to Alves just outside the area and he met the ball with a volley from 20 yards that flew low into the corner.

The second goal came midway through the first half, as a stray Hatem Ben Arfa pass was intercepted by Alves before Angel Di Maria sent Neymar through to score with a delightful chip over Tomas Koubek, who had come off his line.

It was a 21st goal of the season for the world's most expensive player.

Rennes roused themselves to finish the half strongly, however, and Mbaye Niang struck a post before they reduced the arrears five minutes from the interval. Hamari Traore crossed from the right and Kimpembe sliced the ball into his own net.

They continued to cause problems to PSG in the second half, and it was no surprise when Rennes equalised in the 66th minute as Clement Grenier's corner was headed home by Mexer, the Mozambican defender.

Into extra time they went, and Neymar set up Mbappe for a shot against the post, but proof that Rennes had done more than just ruffle PSG's feathers came when France's golden boy was sent off. It was not his or PSG's night, for once.

Paris SG Kylian Mbappe Neymar Football
Get the latest Cricket news, check out the India cricket schedule, Cricket live score . Like us on Facebook or follow us on Twitter for more sports updates. You can also download the NDTV Cricket app for Android or iOS.