Rennes Fight Back To Stun 10-Man Arsenal In Europa League

Arsenal must now turn the tie around in the second leg at the Emirates Stadium next Thursday if they are to progress any further in the Europa League. 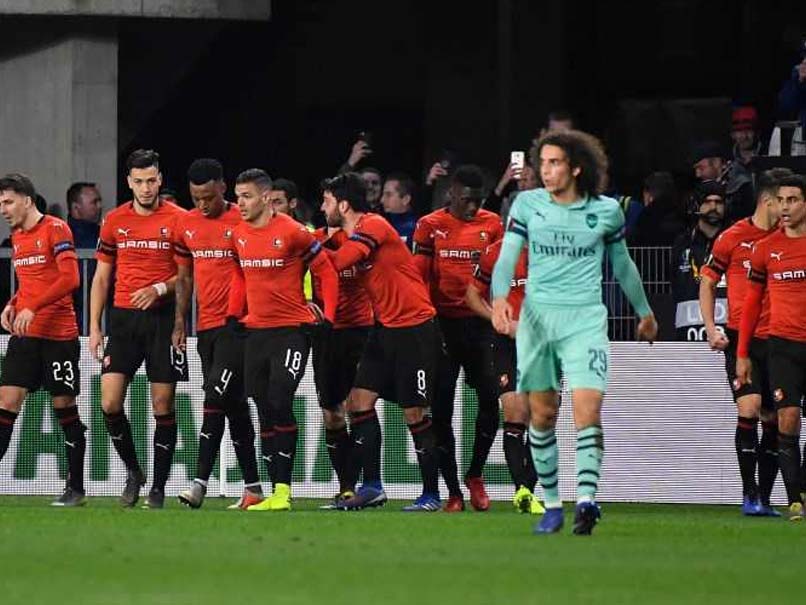 Arsenal face a major battle if they are to reach the Europa League quarter-finals after a 3-1 defeat away to Rennes in France on Thursday, despite Alex Iwobi putting the Gunners ahead early on. Iwobi's goal gave the Premier League side the perfect start in this last 16, first leg at a raucous Roazhon Park, but the match hinged on the sending-off of Arsenal defender Sokratis Papastathopoulos four minutes before half-time. Benjamin Bourigeaud equalised for the French club moments later, and their second-half pressure paid off as a Nacho Monreal own goal put Rennes ahead before Ismaila Sarr's late header gave them a two-goal cushion in the tie.

Unai Emery's side must now turn the tie around in the second leg at the Emirates Stadium next Thursday if they are to progress any further in a competition which represents their only hope of silverware this season as well as offering a potential route into next season's Champions League.

The Gunners recovered from a first-leg deficit to beat BATE Borisov in the last round, but Rennes are a step up in quality and are revelling in what is already their best ever European run. This result is also a shot in the arm for French clubs after Paris Saint-Germain's Champions League humiliation against Manchester United on Wednesday.

Rennes had eliminated Real Betis in the last round and there was a superb atmosphere in a stadium packed to its capacity of almost 30,000.

Arsenal were missing French striker Alexandre Lacazette, who is suspended for both legs of this tie after being sent off against BATE in Belarus.

They still got off to a perfect start, taking the lead inside four minutes when Iwobi's cross-cum-shot from the left edge of the box curled low into the far corner.

Rennes slowly grew into the game, though, with Hatem Ben Arfa -- who was sidelined last season by Emery when both were at Paris Saint-Germain -- increasingly influential.

Petr Cech, who spent two years at Rennes before joining Chelsea in 2004, saved well from a Ben Arfa free-kick in the 34th minute.

As half-time approached, Ben Arfa played in Sarr, who was hauled back by Sokratis just outside the area. The Greek defender had already been booked, so a second caution equalled a red card.

Bourigeaud struck the wall from the resulting free-kick, but the ball came back to him and he sent a stunning half-volley arrowing into the far corner.

Rennes had been unbeaten in all 12 previous home games since the appointment of Julien Stephan as coach in December, and they made the most of their man advantage in the second half.

Cech made several interventions before being beaten again in the 65th minute, as Mehdi Zeffane's cross from the right deflected off Monreal and looped into the net.

Their potentially crucial third goal arrived with two minutes left as James Lea-Siliki whipped in a cross from the left and Senegal star Sarr -- a menace on the right flank all evening -- arrived to head in at the far post.

Arsenal Alex Iwobi Petr Cech Football
Get the latest updates on IPL Auction 2023 and check out  IPL 2023 and Live Cricket Score. Like us on Facebook or follow us on Twitter for more sports updates. You can also download the NDTV Cricket app for Android or iOS.