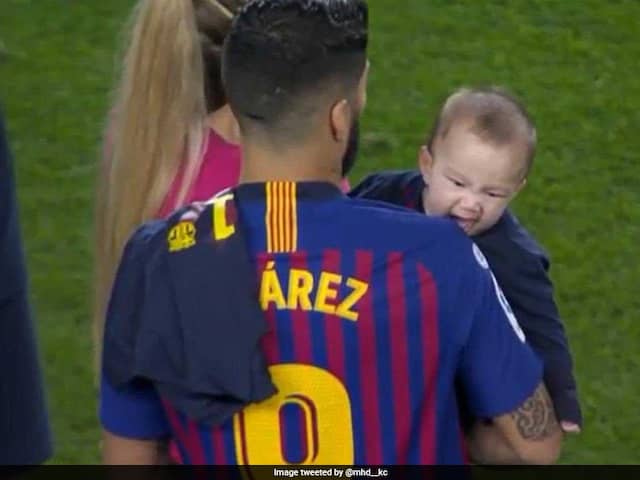 Luis Suarez's son Lautaro brought back the FIFA World Cup 2014 memories on Saturday, after Barcelona sealed their 11th La Liga title with a 1-0 win over Levante at the Camp Nou. Lautaro, only half-a-dozen months old, was captured in a video throwing up and then biting Suarez on his shoulder as the Uruguayan striker was indulged in the title celebration. It was the fifth Spanish league title for the star striker who was roped in by the Catalan club after a prolific performance with English football giants Liverpool.

Suarez's son throwing up on him pic.twitter.com/BbofMRupp1

The video and the picture alike soon began to do rounds on social media with fans revisiting the World Cup 2014 incident when Suarez had bit veteran Italian centre-back Giorgio Chiellini on his shoulder.

It was however not the only occasion when Suarez was caught in such an action. He had earlier bit Chelsea's Branislov Ivanovic on the arm in 2013 and PSV's Otman Bakkal on the shoulder in 2010.

The incident added to the memories of Barcelona's 11th La Liga title which came after their talisman Lionel Messi scored the only goal in their win over Levante.

The Argentine star struck his league-leading 34th goal of the campaign after coming off the bench for the second half to help Barcelona wrap up La Liga title with three games remaining.

Barcelona hold a nine-point lead over second-placed Atletico Madrid, but the Catalans cannot be overtaken thanks to their superior head-to-head record.