Lionel Messi struck his league-leading 34th goal of the campaign after coming off the bench for the second half to help Barcelona wrap up La Liga title with three games remaining. 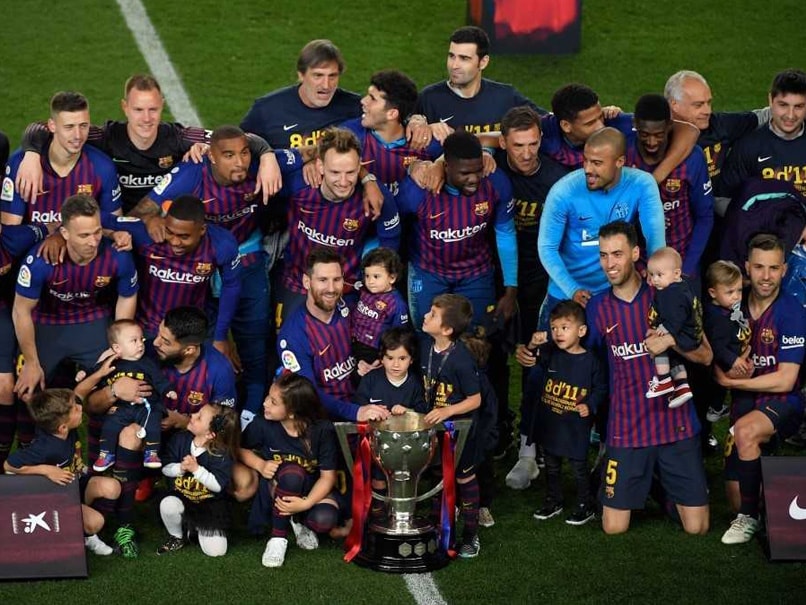 It is Barcelona's 26th La Liga title and nudges them closer to Real Madrid's record of 33 in Spain.© AFP

Lionel Messi clinched an eighth La Liga title for Barcelona in 11 seasons on Saturday as he scored the only goal in a 1-0 win at home to Levante. The Argentine star struck his league-leading 34th goal of the campaign after coming off the bench for the second half to help Barcelona wrap up La Liga title with three games remaining. Barca hold a nine-point lead over second-placed Atletico Madrid, but the Catalans cannot be overtaken thanks to their superior head-to-head record. It is Barcelona's 26th La Liga title and nudges them closer to Real Madrid's record of 33 in Spain.

"To win the title with a distance and gap is difficult with the rivals we have. We've done it two years in a row," Barca coach Ernesto Valverde told Movistar.

"We're happy and to see people enjoying it makes us proud. But we still have challenges ahead."

Valverde initially left Messi on the bench with Wednesday's Champions League semi-final first leg against Liverpool in mind, but he replaced Philippe Coutinho at the break at the Camp Nou.

Coutinho and Luis Suarez pressed Levante goalkeeper Aitor Fernandez into action early on, the Brazilian coming closest to breaking the deadlock when his free-kick rattled the crossbar shortly before half-time.

He was sacrificed for Messi though, and it proved an inspired decision as the Argentine swept in the winner on 62 minutes following a frantic scramble inside the Levante area.

The visitors, not yet safe from the threat of relegation, responded and put Barca on the defensive but were denied a last-gasp equaliser when the ball hit the post and rolled into the grateful arms of Marc-Andre ter Stegen.

"In the end he scored the goal. He always scores goals everywhere," Valverde said of Messi, who celebrated winning his 10th league crown.

Atletico had delayed Barca's title party earlier in the day as they scraped past strugglers Real Valladolid 1-0 after surviving late VAR penalty drama.

Joaquin Fernandez's own goal put Atletico ahead midway through the second half, but they had to endure a nervy final few minutes in which Jan Oblak had to be at his best and they survived a late VAR check over what looked like a clear Santiago Arias handball in the area.

"It's controversial, a ball that hits the hand and the referee's decision is to see if it's voluntary or not," said Saul Niguez, whose cross led to their fortunate winner.

Diego Simeone's side are nine points ahead of local rivals and reigning European champions Real Madrid, who travel to Rayo Vallecano on Sunday amid increasing speculation they will respond to a disappointing season by swooping for Eden Hazard and Neymar.

"There were moments when we wanted to be first and others that I would say no, that's what we deserve."

Valladolid meanwhile stay 17th, just one point and a place away from the relegation zone after a match they will feel they were unlucky to lose.

Earlier on Saturday, Athletic Bilbao and Alaves did their chances of European football next season no favours with a 1-1 draw in the Basque Country.

Seventh-placed Bilbao are five points away from the Champions league places -- with Alaves a further three points back -- and could also see Valencia and Sevilla take the Europa league further away from them when they take on Eibar and Girona.