Real Madrid were mathematically ruled out of the title race after Barcelona beat Alaves on Tuesday while Atletico Madrid look likely to finish above them too for a second consecutive year. 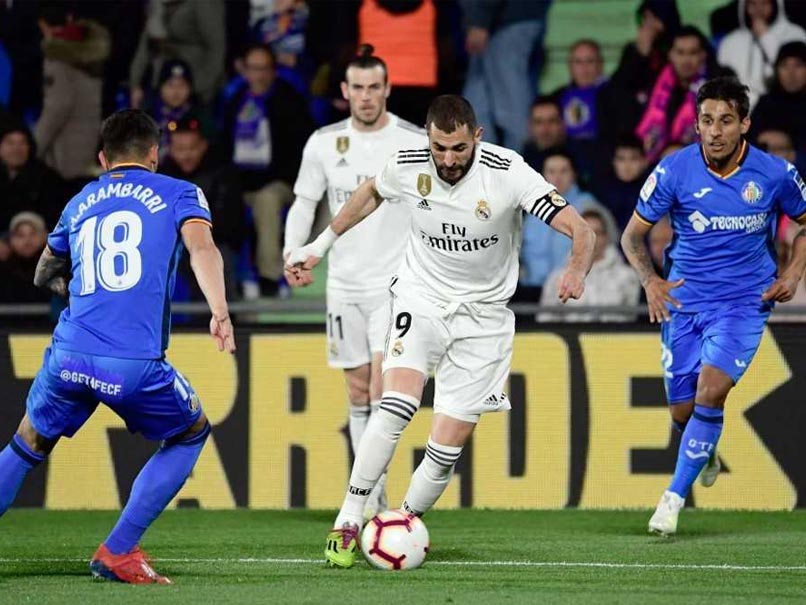 La Liga: Real Madrid drifted to a stalemate that leaves them 15 points behind Barcelona.© AFP

Real Madrid's dreary end to the season took another turn for the worse on Thursday as they were left holding on for a goalless draw away to Champions League chasers Getafe. Just 48 hours before Barcelona are set to be celebrating a 26th La Liga title at Camp Nou, Real Madrid drifted to a stalemate that leaves them 15 points behind the soon-to-be champions and, on this evidence, with significant ground to make up. It says something that Getafe were, in the end, disappointed not to win here, Sevilla's 5-0 thrashing of Rayo Vallecano before kick-off meaning they stay fourth, only by virtue of a superior head-to-head.

Real Madrid were mathematically ruled out of the title race after Barcelona beat Alaves on Tuesday while Atletico Madrid look likely to finish above them too for a second consecutive year.

Zinedine Zidane has insisted La Liga will be the club's "bread and butter" next season, their priority ahead of the Champions League after seven years with only one league title to their name.

But they have work to do, with very few of his squad showing many reasons to keep them this summer and several more looking like they could well be replaced.

"The shame today is we deserved more," Zidane said. "We created chances, in the first half especially. I am not happy with the result, but with the way we played, our concentration, I am happy."

Getafe still have a lot to play for. If they snatch a Champions League spot, it would be one of the greatest shocks La Liga has seen in years, perhaps even trumping Atletico Madrid winning the title in 2014.

Their average attendance here is just under 10,000 while the club's wage bill stands at a little less than 40 million euros. Real Madrid's is close to 570 million.

Karim Benzema skewed wide of the far post with 62 seconds on the clock and Madrid hardly created a better chance for the rest of the half.

Gareth Bale started and was greeted by silence rather than the whistles that have accompanied him at the Santiago Bernabeu in recent weeks. But he looked low on confidence, a shadow of the player he can be.

Bale pulled back for Benzema, who could only find the hands of David Soria on the slide while Casemiro had an instinctive effort blocked from six yards.

But Getafe were largely untroubled even if they lacked creativity, their best opening coming from a free-kick which Mauro Arambarri caught well but Keylor Navas was equal to.

For 10 minutes, Madrid peppered the Getafe goal after the break. Soria came out quickly to deny Bale, pushed a Casemiro shot around the post and then saved from Isco, who should have scored after Dani Carvajal picked him out.

Bale and Brahim Diaz departed, replaced by Marco Asensio and Lucas Vazquez, but it was Navas that was called upon next, making two quick-fire saves to keep out Jorge Molina and Jaime Mata.

Mata wanted a penalty for a Carvajal push as Getafe looked more likely to find a late winner. It was not to be. Getafe's Champions League dream hangs in the balance.

Karim Benzema Zinedine Zidane Gareth Bale Football
Get the latest updates on IPL Auction 2023 and check out  IPL 2023 and Live Cricket Score. Like us on Facebook or follow us on Twitter for more sports updates. You can also download the NDTV Cricket app for Android or iOS.