Gareth Bale departed again to whistles with 14 minutes left, a conciliatory hand slap from Zinedine Zidane offering little consolation as he trudged off. 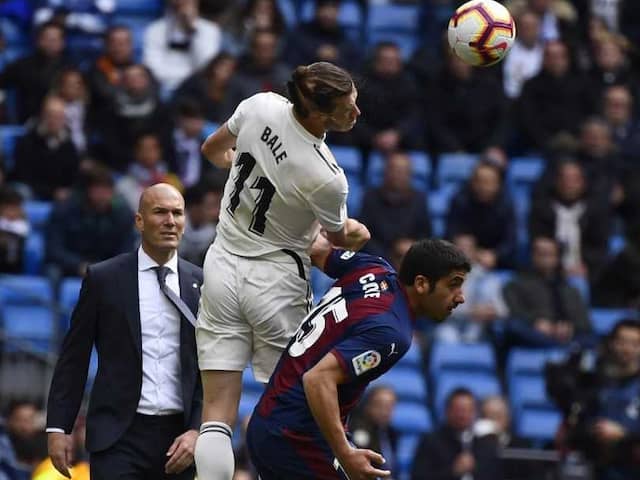 Zinedine Zidane refused to guarantee Gareth Bale's future at Real Madrid after the Welshman struggled again in a 2-1 victory over Eibar on Saturday. Karim Benzema scored twice at the Santiago Bernabeu as Madrid came from behind after Marc Cardona, starting only after an injury to Pedro Leon in the warm-up, gave Eibar a surprise lead. But Madrid improved and a pair of Benzema headers ensured the groans and whistles that had soured the atmosphere for much of the opening hour turned to cheers and applause at the end.

Much of the frustration was again directed at Bale, who started here after being dropped by Zidane for the defeat to Valencia on Wednesday.

Asked afterwards if Bale would be at Real Madrid next season, Zidane said: "We'll see, I'm not going to tell you what's going to happen. Gareth is a Real Madrid player, he has two years left on his contract. We will see. It is not the time to talk about this."

Bale's below-par performances and a lack of support from either coach or fans seem so inter-linked now, it is difficult to know what comes first. He departed again to whistles with 14 minutes left, a conciliatory hand slap from Zidane offering little consolation as he trudged off.

Benzema's trajectory has been the opposite, the Frenchman now with six goals in five La Liga games, four of them since Zidane took over.

"Karim has had a great season," Zidane said. "His goals have perhaps changed people's perception of him. But he has never changed as a player."

Zidane has insisted his players are not on trial but his changing line-ups at least suggest he is examining his options before the summer.

Bale's half began badly as he failed to control Valverde's overhit pass and then got worse as he missed a one-on-one when his finish was saved by Marko Dmitrovic.

The scattering of whistles became a chorus after he dragged a shot wide from 25 yards and it was no surprise his confidence drained away, a poor touch following shortly after.

Bale was not the only one. Madrid lacked precision or purpose, as opponents were allowed through unchecked and passes went astray.

In the 39th minute, as the fans' frustration was reaching its peak, Eibar scored, a crisp move down the left ending with a cute pass from Gonzalo Escalante to Cardona, who chipped into the net.

The second half started better for Madrid, with Benzema scoring only to be called back for offside before the Frenchman headed in the equaliser just before the hour. Marco Asensio did brilliantly to weave into space and dig out the cross.

Bale might have been in but Asensio's pass struck the back of his heel and the Welshman departed with 14 minutes left, to disgruntled whistles.

Madrid scored the winner without him. Kroos' whipped cross was again met by the forehead of Benzema and, again, the ball found the net.

Benzema should have completed his hat-trick late on but one finish was palmed away by Dmitrovic and another, with the goal gaping, looped over. He even hit the post with a bending effort in injury-time. The treble was not to be.

Karim Benzema Zinedine Zidane Football
Get the latest Cricket news, check out the India cricket schedule, Cricket live score . Like us on Facebook or follow us on Twitter for more sports updates. You can also download the NDTV Cricket app for Android or iOS.