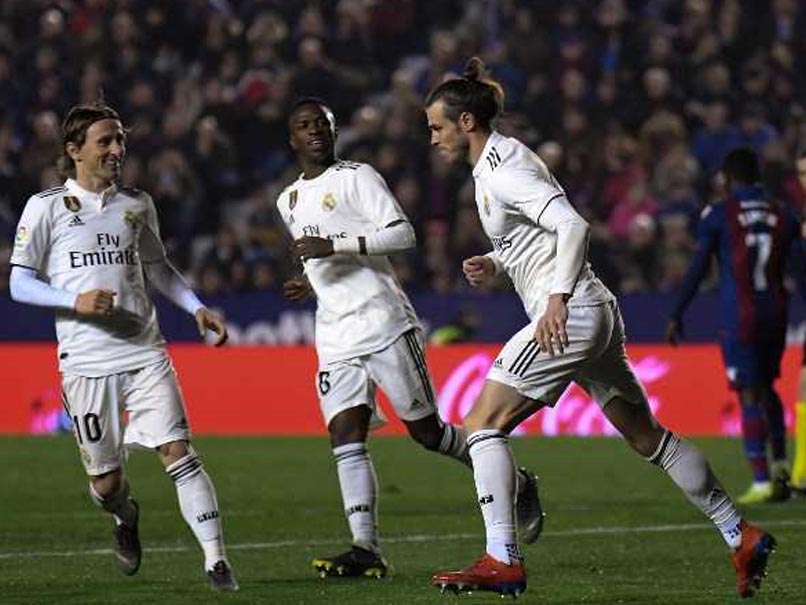 Gareth Bale's winner vs Levante only served to reignite the debate about his problems at Real Madrid.© AFP

Even Gareth Bale's match-winning goal against Levante only served to reignite the debate about his problems at Real Madrid. After coming off the bench, yet again, Bale converted a controversial penalty to secure a barely deserved 2-1 league victory on Sunday. Bale refused to celebrate his 78th-minute winner. Stony-faced, he brushed off the congratulations of teammates. His reaction drew only ambivalent backing from his manager and ferocious criticism in the Spanish press. "He won us the game," said coach Santiago Solari. "The players can celebrate goals how they want, as long as they score."

It was "an ugly gesture", said the Spanish press.

With two Clasicos coming up against Barcelona, in the Cup on Wednesday and La Liga on Saturday, the 29-year-old Welshman could find himself again a backup in the season which offered a chance to fill the starring role opened by the departure of Cristiano Ronaldo.

Karim Benzema and Bale were expected to take over as attacking leaders, but only the Frenchman, who has scored 20 goals in 40 appearances, seems to have embraced the responsibility.

Bale has a taste for the big occasion. He scored twice in the Champions League final last season against Liverpool and three times in the final of the Club World Cup in December.

The Welshman has appeared in just 30 games in all competitions, scoring 13 times and completed 90 minutes three times in the league this season.

In the last 11 matches he has only started twice, and in one of those, against Villarreal at the beginning of January, was yanked off at half-time.

In the last five games Bale has started on the bench four times, although he has scored three times as a sub.

Vinicius is joyous. Bale is grumpy.

"That Gareth Bale is angry is a glaring reality," wrote sports daily Marca.

"In the club there are those who think that the angrier the Welshman is ... the better he performs," sports daily Marca wrote.

The coach praised Bale's "belligerence" in his brief appearance on Sunday.

"I want him to find the same level of performance as in the Club World Cup," Solari has said.

That belligerence could still rule Bale out against Barcelona. Spanish football authorities are yet to rule on an obscene gesture he made to Atletico fans after coming off the bench to score in the Madrid derby.

Bought from Tottenham for 100 million euros in 2013, Bale continues to frustrate Spanish fans.

Already notorious at Spurs for his low pain threshold, he has continued to suffer frequent injuries at Madrid. The Spanish press has counted more than 20, more or less serious, in six seasons.

Bale's limited integration into Spanish life has also drawn criticism. He has not mastered the language and would rather watch golf on television than La Liga matches involving future opponents.

Bale argued that: "In Spanish, I can speak but perhaps not address all the details that I would need."

Goalkeeper Thibaut Courtois said the Welshman's nickname in the dressing room is "the golfer".