Atletico Madrid secured a deserved 2-0 victory from a thrilling first leg at the Wanda Metropolitano. 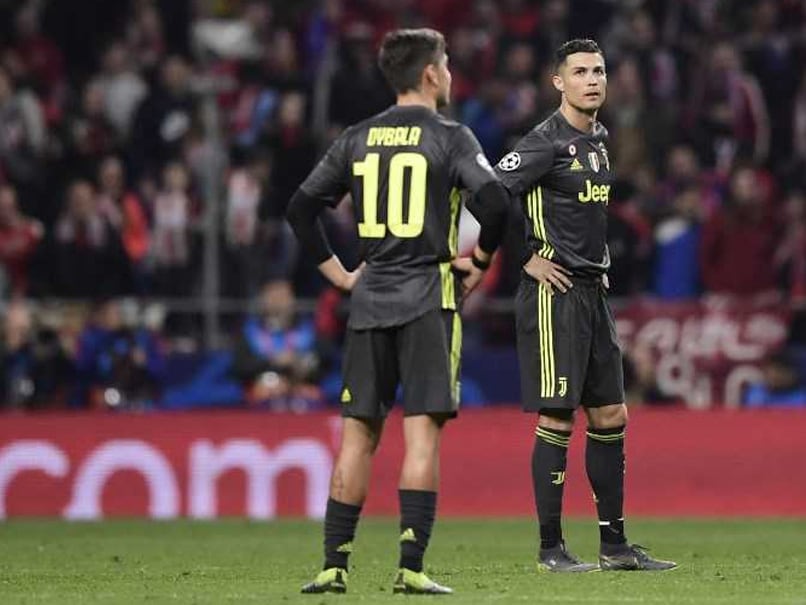 Cristiano Ronaldo's Champions League mission with Juventus stalled on Wednesday as Atletico Madrid secured a deserved 2-0 victory from a thrilling first leg at the Wanda Metropolitano. Ronaldo returned to the Spanish capital, where he enjoyed unprecedented success in this tournament with Real, but it was their rivals celebrating at the final whistle as goals from Jose Gimenez and Diego Godin put Atletico within sight of the quarter-finals. "We are not through yet," Atletico coach Diego Simeone said. "There is another match to play and we know we will have to suffer."

"Fortunately we didn't concede a third," said Juventus boss Massimiliano Allegri. "Because 2-0 is a result that can be turned around. We're not dead yet."

But this was a victory that Simeone's side fully deserved. Antoine Griezmann had hit the crossbar while VAR twice intervened, correctly, in Juve's favour, cancelling a penalty for a foul on Diego Costa and then ruling out an Alvaro Morata header just before Gimenez struck.

While Juventus tried to preserve the stalemate, Atletico were bold. Simeone introduced Morata, Thomas Lemar and Angel Correa, all around the hour-mark, and his daring paid off. "I showed balls," Simeone said.

Juve are certainly not dead and buried, particularly given Costa and Thomas Partey will both be suspended for the return in Turin after each picked up yellow cards.

But the failure to score an away goal, and their clear inferiority in the second half does not bode well for any hopes of a comeback.

"They don't give you chances," said Allegri. "They make you play badly."

Defeat in the last 16 for either team would be unthinkable, for Atletico, who know the final will be played here, at their own stadium, on June 1, the perfect chance to wrestle the trophy off Real in the very city they share.

And for Juventus, whose wait for Europe's premier prize has now entered its 23rd year, when expectations are higher than ever given they now boast the tournament's most prolific ever player.

Cristiano Ronaldo, though, endured a disappointing night, suffocated from the outset by a typically relentless Atletico backline.

Perhaps it was frustration that made him wave five fingers in the direction of the baiting Atletico crowd, presumably to signify his five Champions League triumphs.

His best contribution was an early, driven free-kick from 30 yards, that had to be pushed over by Jan Oblak, and the dummy-shot before it, that exposed Costa as encroaching, for which he received his yellow card.

Costa was his bristling self and almost won a penalty when referee Felix Zwayer thought he was tripped by Mattia de Sciglio. But VAR showed he had not only exaggerated the contact but also extended his run into the area.

The rest of the half was tighter but Atletico had two golden opportunities early in the second. First, Griezmann volleyed Costa in behind but the Spaniard sidefooted wide with only Wojciech Szczesny to beat.

Then, it was Griezmann's turn, this time Szczesny intervening, tipping the Frenchman's lob onto the crossbar before Giorgio Chiellini stopped Costa from reaching the rebound.

Atletico were pushing and it was Morata, on for Costa, who made the difference. He powered in a brilliant header only to see it chalked off for a push but he was not deterred, and when Juve failed to clear his knock-down at a corner, Gimenez was perfectly placed.

Juve were rattled and their failure to rally could cost them dear. Atletico scored again as Godin rose to head in at the near post, only to turn and find Mario Mandzukic had cleared the ball to his feet. The angle was tight but the net was open.

Juve might had snatched an away goal late on but Oblak pushed over Federico Bernardeschi's shot. They have it all to do.