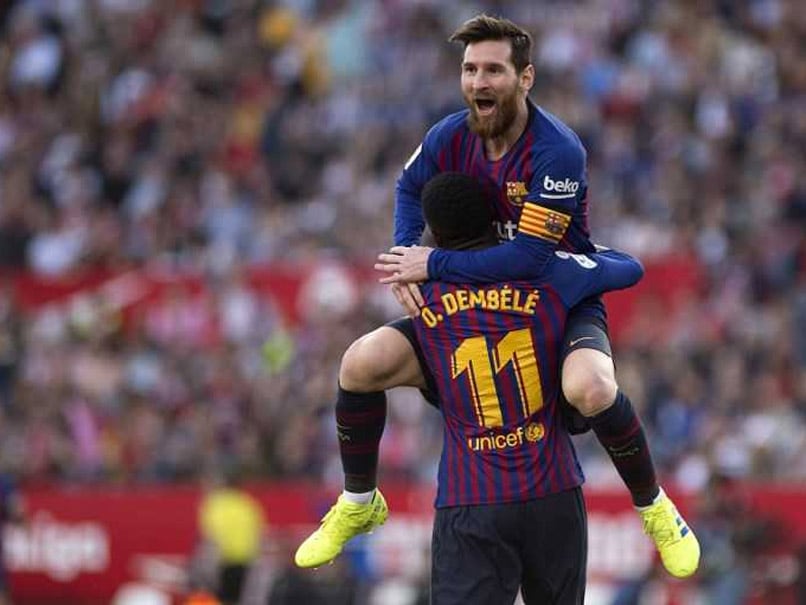 Lionel Messi scored the 50th hat-trick of his career© AFP

Lionel Messi scored the 50th hat-trick of his career, to inspire Barcelona to a 4-2 victory over Sevilla on Saturday and take them one step closer to winning La Liga. The Argentinian superstar left the fans shocked as he thundered a volley from 16 yards to equalise for Barca who had gone behind to Jesus Navas' opener on 22 minutes. Messi leads the La Liga scoring charts after notching his 25th goal in 23 league appearances this season. He also has 28 strikes league against Sevilla which is the most goals any player has managed against a single opponent in La Liga history.

At the age of 31, Messi shows no signs of slowing down. In all competitions, he has 33 goals in 32 games - including six in the Champions League as Barcelona chase the treble.

Lionel Messi scored his 50th career hat-trick in the game against Sevilla on Saturday February 23, 2019
He's not from the planet earth #LaLiga#Barca#Messi
pic.twitter.com/Lp2YD1OP8W

"We cannot always be at our best," Messi said afterwards.

"We came from a streak when, to be honest, we weren't playing our best football. If the game flows it is easier to score goals."

Luis Suarez needed a goal after a disappointing performance against Lyon in midweek and Lionel Messi arranged that too. It was his pass that Suarez converted for a fourth, after Jesus Navas and Gabriel Mercado had twice put Sevilla ahead in the first half.

Sevilla's top-four hopes look increasingly uncertain but for Barcelona, this was one of the toughest tests left in their run-in, with perhaps the most difficult to come next weekend, against Madrid at the Santiago Bernabeu.

Real, who face Levante on Sunday, sit 12 points behind Barca and their best hope of a domestic trophy is surely now in beating them first on Wednesday in the Copa del Rey.

"This is not the title almost won but it was important to win today," Messi said. "It gets harder towards the end and it is never easy here. Today we were back to being us."

As well as a return to form for Barca and Messi, there was a return to the team for Samuel Umtiti, the defender handed his first appearance in three months after recovering from a knee injury.

It was given an early test as Wissam Ben Yedder twisted him one way and then the other but Umtiti was quick on his feet and did well to make the block.

Sevilla had started at a furious pace and it was the speedy Navas that scored first, sprinting almost 78 metres to meet the end of a slick counter-attack.

Messi lost the ball and Ben Yedder set off through the centre, teeing up Navas on the right to find the far corner.

Messi soon made amends. Ivan Rakitic sent over a dangling cross, which he volleyed sweetly past Tomas Vaclik with his left foot.

The ball was flying from one end to the other as Umtiti stopped the lively Pablo Sarabia and Gerard Pique's blistering break forward was halted by his opposite number three, Sergi Gomez.

Sevilla scored next, just before half-time, with Marc-Andre ter Stegen's underhit clearance allowing Sarabia to scuttle down the right. He flicked the ball off the goalline and back to Mercado, who steered it into the net.

Ousmane Dembele came on and should have equalised, fluffing his finish after a cross from Suarez, who should have had a penalty when Simon Kjaer caught him late.

Messi provided the finishing touch. Again it came from the goalkeeper, Vaclik's punt falling straight to Rakitic. Dembele pulled back for Messi, who took one touch and curled it, this time right-footed, into the top corner.

Sevilla looked dead on their feet, their early intensity draining away, and Messi landed the knock-out blow. There was a hint of fortune as Carles Alena's shot deflected neatly into his path. Vaclik came out but Messi scooped it over his body and in.

Three times a scorer, there was still time for an assist. Messi chested and poked the ball through for Suarez. His lob made it four.