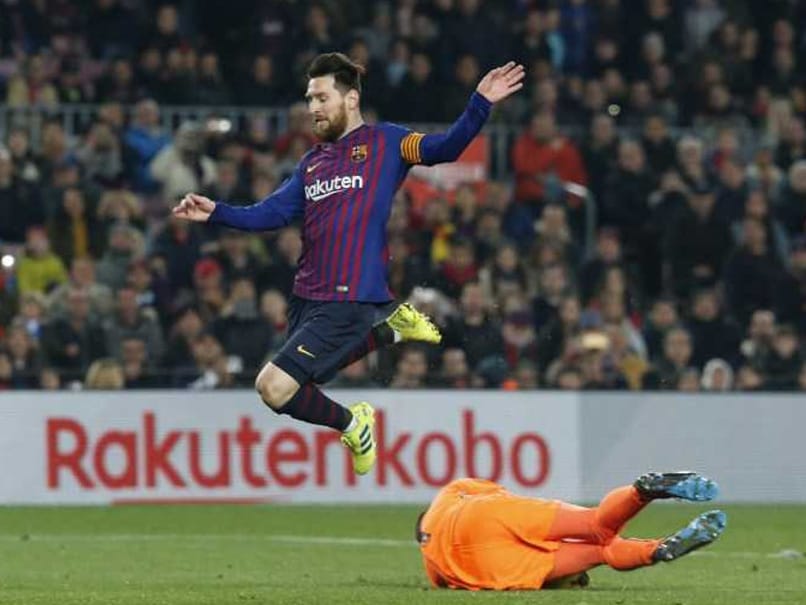 Lionel Messi scored a penalty and missed another as La Liga leaders Barcelona ground out an unconvincing 1-0 win over Real Valladolid, while Antoine Griezmann surpassed Fernando Torres with his 130th goal for Atletico Madrid. Messi's fitness was again in the spotlight on Saturday after a niggling thigh strain in recent weeks, but he completed the full 90 minutes at the Camp Nou and hit the 30-goal mark at Barcelona for the 11th straight season.

The Argentine coolly dispatched a spot-kick just before half-time, drilling beyond the reach of Jordi Masip after Gerard Pique was bundled to the ground by Valladolid midfielder Michel.

Masip brilliantly tipped over a Messi volley soon after the interval and Luis Suarez wasted a huge opportunity to double the lead shortly after replacing Kevin-Prince Boateng with an hour gone.

Messi found himself booked for dissent after an apparent foul on him went unpunished, and he then blew the chance to kill off Valladolid when Masip kept out his second penalty of the night -- awarded following a trip on Philippe Coutinho.

The excellent Masip alertly gathered Messi's follow-up header and again denied Suarez late on as Barca pulled seven points clear of Atletico ahead of their trip to Lyon in the Champions League last 16.

"We haven't played well. The truth is it wasn't a good match today. The only good thing is the victory," Pique, who made his 300th appearance in La Liga told Movistar.

"Getting back on track with three points is important after two draws in the league. But we definitely have to improve. We have to be better on Tuesday otherwise we'll have a tough time."

Griezmann scored a second-half winner in Atletico's 1-0 victory at neighbours Rayo Vallecano to provide a timely boost going into next week's showdown with Cristiano Ronaldo and Juventus.

The French forward surpassed Torres -- now playing for Sagan Tosu in Japan -- for fifth all-time on the Atletico goalscoring charts as they shook off two successive defeats, including last week's 3-1 loss at home to Real Madrid.

Griezmann struck for the tenth time in his last 11 outings, forcing home from six yards on 74 minutes after Alvaro Morata laid off a high, looping ball inside the area.

"Griezmann is an extraordinary player, he always adapts to what the team needs. He's very important for us," Atletico coach Diego Simeone said.

The late Luis Aragones, who coached Spain to the European Championship title in 2008, is Atletico's record goalscorer with 172.

"It's always tough at this stadium. We started off well and we had chances in the first 15 minutes such as Saul's header, but then they improved," Simeone added.

"Our second half substitutions gave us more offensive strength and that allowed us to get our goal. It was a very tough match."

Real Madrid, two points behind Atletico in third, could move back into second and to within six points of Barca when they host Girona on Sunday.

Fernando Torres Football
Get the latest updates on Fifa Worldcup 2022 and check out  Fifa World Cup Schedule, Stats and Live Cricket Score. Like us on Facebook or follow us on Twitter for more sports updates. You can also download the NDTV Cricket app for Android or iOS.