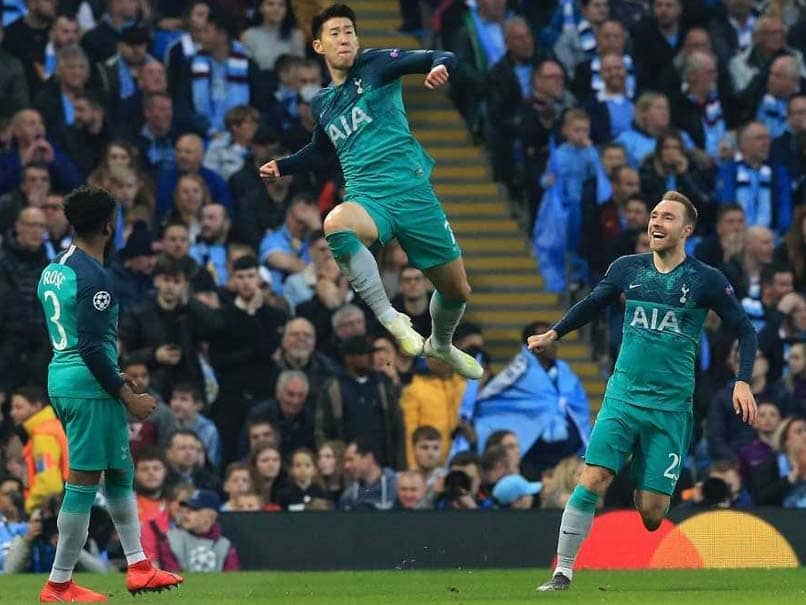 Tottenham's semi-final date with Ajax will be their first European semi-final since the 1984 UEFA Cup.© AFP

Tottenham star Son Heung-min admitted his side's stunning Champions League quarter-final success against Manchester City was the craziest match he has ever experienced. In one of the most dramatic matches in Champions League history, Son scored twice in the space of three minutes early in the first half to give Tottenham a 2-1 lead in the second leg at the Etihad Stadium. City hit back to take a 4-2 lead that would have sent them through to the semi-finals.

That was enough for Tottenham, whose 4-3 defeat secured an away goals triumph after they won the first leg 1-0.

Tottenham still needed another VAR assist before they could celebrate a first Champions League semi-final berth as Raheem Sterling's goal in the final seconds was ruled out for offside against Sergio Aguero.

In total there were five goals in the first 21 minutes -- the fastest five goals scored in Champions League history.

It was all too much for South Korea forward Son, whose side will face Dutch club Ajax in the last four.

"I have never seen something like this, It was a very tough game, a very crazy game. But we are very proud of our team-mates. It was madness," Son said.

"Sometimes you are annoyed with VAR but today it is 'thank you and good decision'.

"We fought together for 90 minutes. We showed unbelievable character and fight."

Mauricio Pochettino's men were 12 minutes away from being eliminated in the group stages before a late fightback against PSV Eindhoven.

Now they are in their first European semi-final since the 1984 UEFA Cup.

Tottenham playmaker Christian Eriksen admitted he was relieved after City's late goal was ruled out as he had given the ball away in the build-up.

"I think I must be one of the luckiest guys on the planet today. With the last one they scored, I thought it was over. Thank God the ref gave offside," Eriksen said.

"It was a fun game to play but I'm lucky we're on the good side."

The England captain tweeted a video of himself shouting "let's go, come on" in front of a television showing Tottenham's celebrations.

He accompanied the video with the caption: "Omggg! I love you boys!!!!"