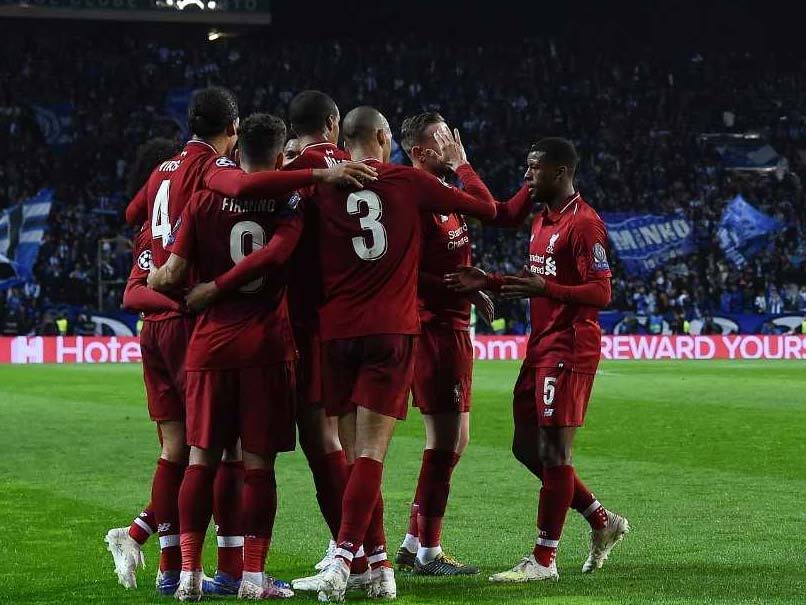 Liverpool march on to a last-four showdown against Barcelona.© AFP

Liverpool manager Jurgen Klopp hailed as "crazy" his team's achievement in once again reaching the semi-finals of the Champions League after they comfortably saw off FC Porto on Wednesday. "I'm very, very happy of course," said Klopp after his side's emphatic 4-1 win in Portugal that saw them win their quarter-final tie 6-1 on aggregate and set up a last four tie against Barcelona. "I said it before that it would be very difficult so how can I be surprised now that it was difficult," he added.

The Premier League leaders weathered an early storm before goals from Sadio Mane, Mohamed Salah, Roberto Firmino and Virgil van Dijk gave them a comfortable victory and set up a mouthwatering semi-final against Barcelona.

"We had to defend in the first half-hour a lot in the last third, that's ok, no problem," he said.

"We had chances, we scored a goal, we had a big chance before half-time and then in the second half it was clear that Porto could not keep their level until the end.

"So we won the game and now another semi-final, it's unbelievable really. It is our second time in a row in the semis, that is really something crazy!"

After losing in the final to Real Madrid last year, Klopp's team are hoping to go one better in Europe this season and also remain on course for a remarkable double.

While Manchester City were knocked out of the Champions League on Wednesday, ending their dream of a quadruple, Liverpool could still win the Premier League and lift the European Cup.

However, the prospect of Barcelona in the last four is a daunting one.

"You can imagine I don't think too much about that but I am really happy about the fact we play them," added Klopp.

He then insisted that his thoughts will be quickly turning back to the Premier League.

"Tonight we are in the semi-finals and we play on Sunday against Cardiff.

"That is in my mind and that will be 100 percent on my mind when I wake up tomorrow and not Barcelona."

FC Porto Football
Get the latest updates on IPL Auction 2023 and check out  IPL 2023 and Live Cricket Score. Like us on Facebook or follow us on Twitter for more sports updates. You can also download the NDTV Cricket app for Android or iOS.