The decisive second leg will be played at Manchester City's Etihad Stadium on April 17. 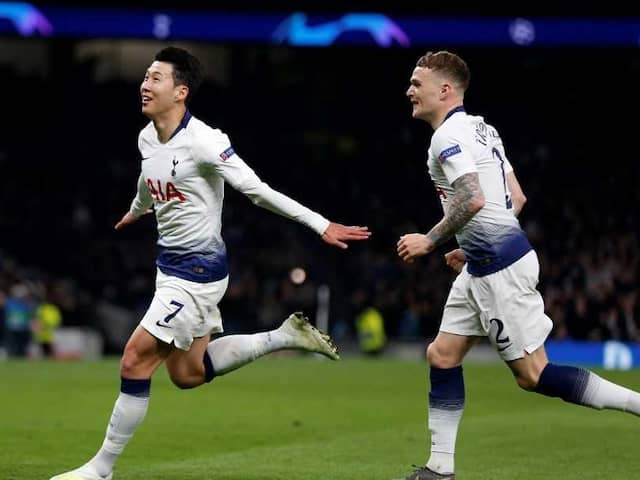 Son Heung-min struck 12 minutes before the end to snatch the victory.© AFP

Son Heung-min gave Tottenham Hotspur first blood in their all-English Champions League quarter-final with Manchester City after firing them to a 1-0 first-leg win on Tuesday. Son struck 12 minutes before the end to snatch the victory from a tight contest at Tottenham's new stadium after Sergio Aguero missed a controversial VAR-awarded penalty early in the first half. The decisive second leg will be played at City's Etihad Stadium on April 17. It was an impressive display of resilience from Mauricio Pochettino's men after star striker Harry Kane limped off with his latest ankle problem early in the second half.

"It was a very difficult game and in the end, we were more clinical than them."

Son had scored the first goal in Tottenham's new ground in their Premier League win over Crystal Palace last week.

"I like this stadium, it is amazing to play here, I am grateful for the opportunity to play at this stadium," Son said.

While Tottenham have control of the tie, Son warned that they will need another herculean effort to knock out City at the Etihad Stadium on April 17.

"It will be very tough, but we performed well, we fight well," he said.

"We should just enjoy like we did today and fight altogether."

City's bid to win an unprecedented quadruple is now under threat after another tired display.

It appeared the strain of competing on four fronts might be taking its toll on City as they followed a lethargic FA Cup semi-final win over Brighton with this tepid effort.

But City manager Pep Guardiola insisted his players had done enough to deserve a draw and are more than capable of mounting a fightback in the second leg.

"We created chances, more than the penalty. Except for a few set-pieces and some counter-attacks, we controlled the game," Guardiola said.

"When we are not good I say so, but I don't have that feeling.

"The result is not the best one but we have to make these kind of comebacks to go through.

"We have the second leg. It looks complicated but we will try.

"We are going to try at home, with our fans, with our families. The situation is what it is."