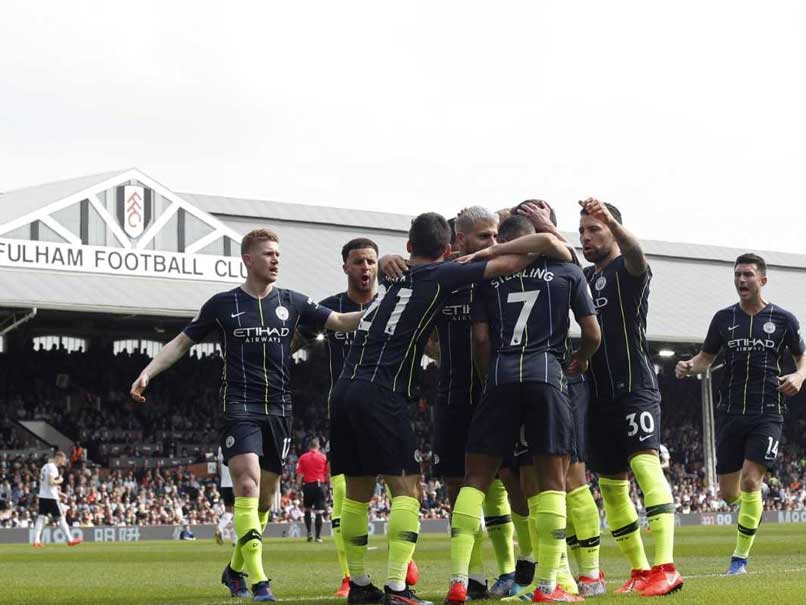 Bernardo Silva and Sergio Aguero ensured the game was won in the first 27 minutes.© AFP

Manchester City cruised back to the top of the Premier League as relegation-bound Fulham were swatted aside by the champions 2-0 at Craven Cottage on Saturday. Bernardo Silva and Sergio Aguero ensured the game was won in the first 27 minutes, but the final margin of victory could have been far greater had City chosen to click through the gears. Pep Guardiola's men now lead Liverpool by a point with seven games remaining for both sides, but Jurgen Klopp's side can retake top spot with victory over third-placed Tottenham on Sunday. In the other match, Marcus Rashford and Anthony Martial scored a goal each as Manchester United defeated Watford 2-1.

Fulham, by contrast, remain 13 points adrift of safety with just 18 left to play for.

City remain on course for an unprecedented quadruple of Premier League, Champions League, FA Cup and League Cup, which they retained last month.

A potential 14 games now stand between them and history, but there will be far tougher tests in wait than a dispirited and dishevelled Fulham, who played a huge part in their downfall.

Sixty points now separate the sides at opposing ends of the table and the hosts' inability to play simple passes highlighted why they are set for the drop after just one season back in the top flight.

Aguero had already seen an effort cleared off the line before Silva opened the scoring just five minutes in.

Kevin de Bruyne, on his return from a month-long injury absence, intercepted a loose pass deep inside the Fulham half and fed Aguero, who in turn played the ball to  Silva to curl into the far corner on his favoured left foot.

De Bruyne should have scored for just the second time in an injury-plagued Premier League season when he fired too close to Sergio Rico with just the Fulham goalkeeper to beat, while the Spaniard also parried Ilkay Gundogan's effort from the edge of the box.

A second City goal seemed only a matter of time, though, and again Fulham made it easy for their visitors by coughing up possession close to their own goal.

This time the roles were reversed as Silva slipped in Aguero who expertly found the top corner for his 29th goal of the season.

So calamitous was Fulham's retention of the ball that every completed pass was met with loud cheers from the home fans at stages in the first-half.

However, the hosts nearly had an unlikely route back into the game when Joe Bryan's shot flashed across Ederson's goal just before the break.

City were happy to canter through the second period without expending too much energy with eight games in a 25-day period to come in April.

Kyle Walker came closest to adding to their advantage with a thumping shot off the outside of the post.

An otherwise comfortable afternoon may have come at a cost, though, as Aguero appeared to be carrying an injury as he was replaced by Gabriel Jesus just before the hour mark.

Sergio Aguero English Premier League Football Fulham vs Manchester City, Game week 32 Manchester United vs Watford, Game week 32
Get the latest updates on ICC Women's Cricket World Cup 2022 and IPL 2022, check out the Schedule , Live Score and IPL Points Table. Like us on Facebook or follow us on Twitter for more sports updates. You can also download the NDTV Cricket app for Android or iOS.