Watch: Lionel Messi's Reaction As Cristiano Ronaldo Says He Hopes To Have Dinner With Him

Cristiano Ronaldo and Lionel Messi were seen together during the UEFA Champions League draw on Thursday at Monaco. 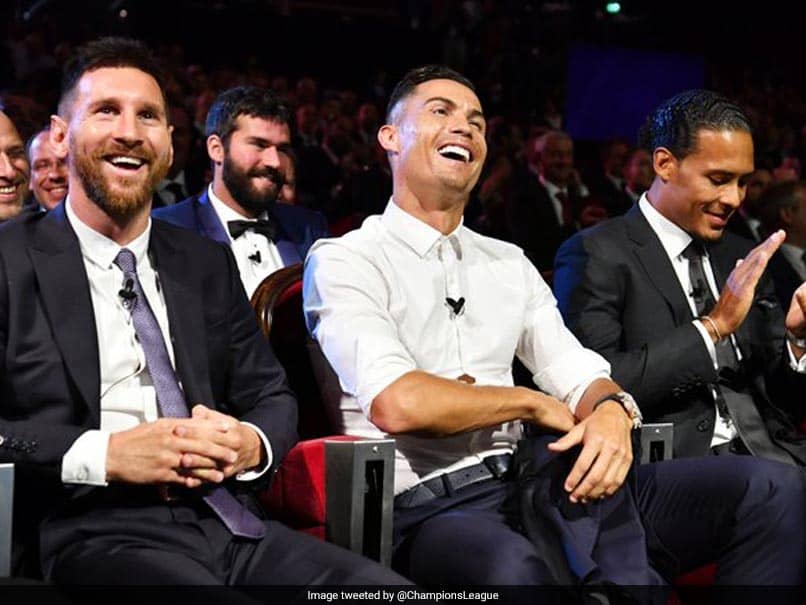 Cristiano Ronaldo and Lionel Messi were all smiles on Thursday.© Twitter

Cristiano Ronaldo and Lionel Messi's on-field rivalry is stuff of legends, and while the two superstars of football may not have seen eye to eye on many occasions,, the mutual respect is beyond any doubt. However, in the past year, the rivalry between the Portuguese and Argentine has seemed to have gone off the boil with Ronaldo leaving Spanish shores to join up Juventus in Italy. Messi continues to be the benchmark in Spain with Barcelona, but Ronaldo's departure has left a massive hole in Real Madrid, which is yet to be filled. On Thursday, the star duo was once again seen together during the Champions League draw in Monaco.

In a candid interview, Ronaldo spoke about his rivalry with Messi and talked about how the two pushed each other to improve. But the highlight of the interview was when the Juventus forward revealed that the two had never had "dinner together yet" but hoped they would in the future.

"It's not easy but of course we have a good relationship," said Ronaldo of Messi.

"We have not had dinner together yet, but I hope so in the future," said the Portuguese star.

"It's great to be a part of the history of football. I am there, and of course, he is as well."

Ronaldo: "We've not had dinner together yet, but I hope in the future!"@Cristiano & Messi at the #UCLdrawpic.twitter.com/KOFY8680tU

Messi and Ronaldo had claimed five of the previous eight awards between them, with Andres Iniesta (2012), Franck Ribery (2013) and Luka Modric (2018) completing the winners' list.

Ronaldo's first season in Italy after joining Juventus from Real Madrid brought him a Serie A winners' medal, but the Turin giants suffered a shock Champions League quarter-final loss to Ajax.

Lionel Messi Virgil Van Dijk Football
Get the latest updates on India vs England Series, India vs England , live score and IPL 2021 Auction . Like us on Facebook or follow us on Twitter for more sports updates. You can also download the NDTV Cricket app for Android or iOS.