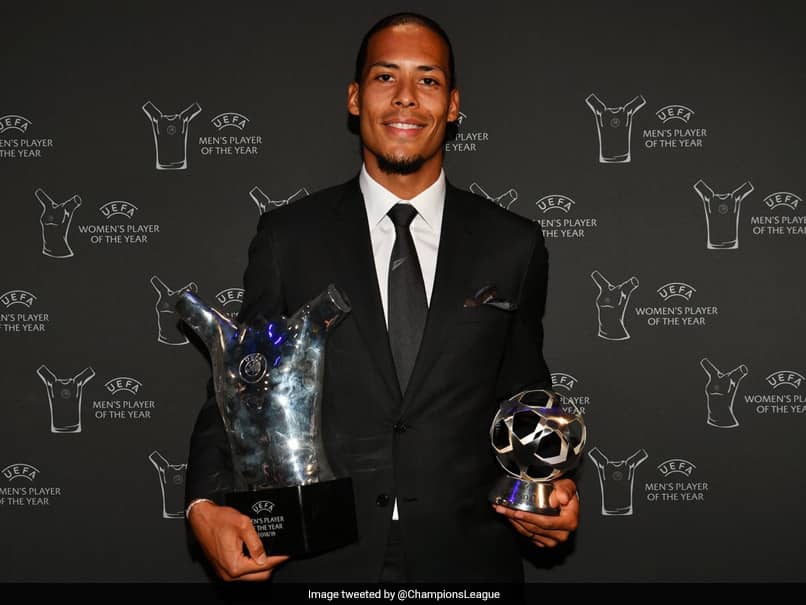 Virgil Van Dijk is the first defender to win the award since the inaugural edition in 2010-11.© Twitter

Liverpool centre-back Virgil van Dijk won the UEFA Men's Player of the Year award on Thursday, edging out Lionel Messi and Cristiano Ronaldo, while Lucy Bronze took the women's prize. Dutchman Van Dijk starred as Liverpool won their sixth European Cup last season with a 2-0 Champions League final victory over Tottenham in Madrid. "I need to thank my teammates, without them I would not have achieved what I have achieved," Van Dijk told BT Sport.

"It's been a long road and it's part of my journey. I'm very proud to get this trophy. It's credit to everyone who has helped me."

The 28-year-old is the first defender to win the award since the inaugural edition in 2010-11.

He moved to Liverpool from Southampton in January 2018 for a then-world record fee for a defender of 75 million pounds (USD 91.4 million), immediately helping them reach that season's Champions League final where they lost to Real Madrid.

But Van Dijk was a key figure as Liverpool won their first major trophy since 2012 last term, while also setting a club-record points tally in finishing second by a point behind Manchester City in the Premier League.

"I wasn't 18 and went straight to the top. I had to work every step of the way," added Van Dijk, who was also part of the Netherlands side who lost the inaugural Nations League final to Ronaldo's Portugal.

Messi and Ronaldo had claimed five of the previous eight awards between them, with Andres Iniesta (2012), Franck Ribery (2013) and Luka Modric (2018) completing the winners' list.

The 27-year-old Bronze is the first English player to win either of the UEFA player of the year titles.