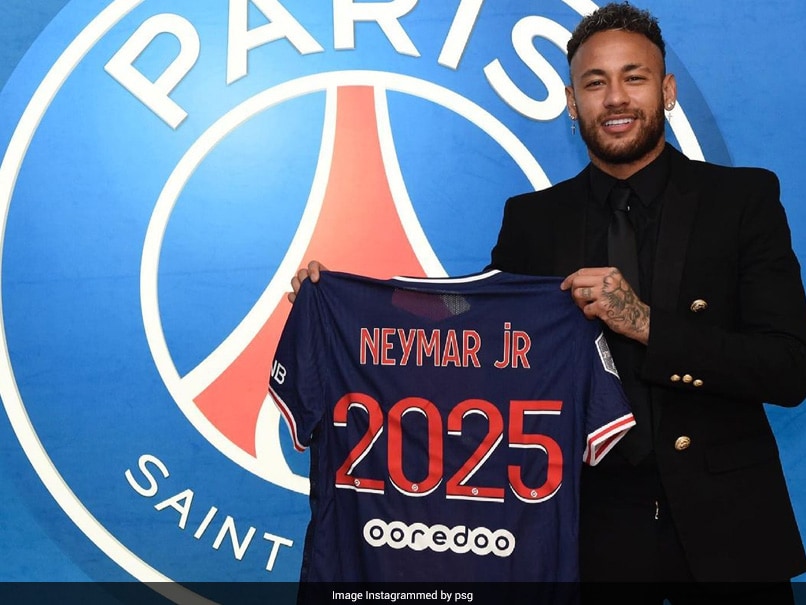 Ligue 1: Neymar arrived to PSG from Barcelona in 2017.© Twitter

Neymar has signed a contract extension that will see him stay at Paris Saint-Germain until the end of the 2024-2025 season, the reigning French champions announced on Saturday. The Brazilian has claimed three Ligue 1 titles with PSG since arriving in 2017 from Barcelona for 222 million euros (270 million American dollars) in what remains the most expensive transfer in history. "I'm really pleased to continue my adventure at Paris Saint-Germain," the 29-year-old said in a club statement after signing a contract extension until June 20, 2025.

PSG coach Mauricio Pochettino said in a press conference: "Everyone in the PSG family is happy that a player of Neymar's talent has extended his contract."

Neymar has also won two French Cups with PSG, but the major honour that he was bought by the Qatari-owned club to win, the Champions League, continues to prove elusive.

He helped PSG to reach last season's Champions League final where they were beaten by Bayern Munich but the club's chances of reaching the final again were crushed by Manchester City on Tuesday -- and Neymar was ineffectual in the 2-0 semi-final second-leg defeat in England.

There has frequently been speculation in Spain that Barcelona wanted to re-sign him, but Neymar's decision to extend his deal in the French capital is not a surprise as he has looked increasingly settled at PSG in recent months.

Lionel Messi said in September 2019 he would have "loved" Neymar to return to the club.

"I would have loved for Neymar to come. I don't know if Barca did everything possible to bring him back but it's true that negotiating with PSG is not easy," he said at the time.

PSG will now turn their attention to persuading forward Kylian Mbappe to stay at the club.

The French World Cup-winning forward is coveted by a host of Europe's top clubs.