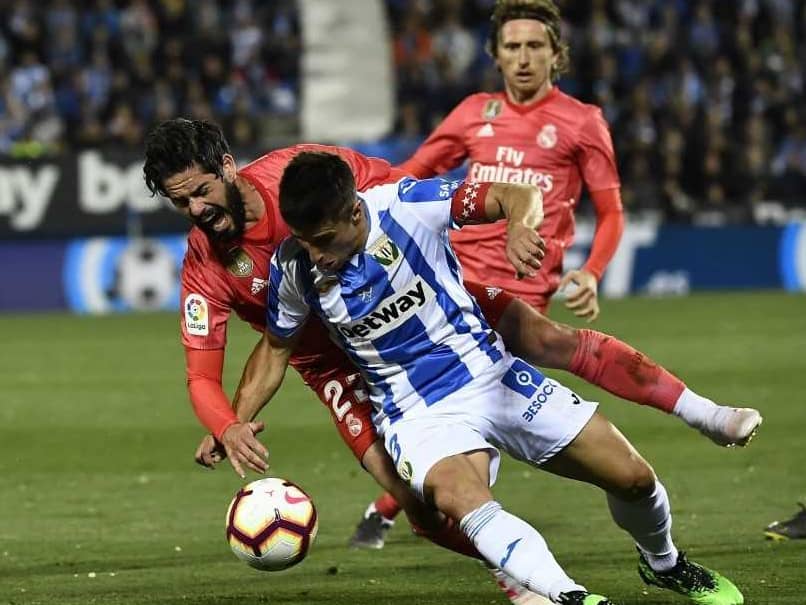 Real Madrid took the Monday night slot reserved for La Liga's lower teams and never really looked out of place as Karim Benzema's goal was enough only for a 1-1 draw away to Leganes. Real Madrid delivered another thoroughly underwhelming performance at Butarque to remain 13 points adrift of Barcelona, with Zinedine Zidane's second reign as coach now delivering three wins, one defeat and a draw. Leganes might even have won it after Jonathan Silva gave them the lead shortly before half-time and while Benzema scored his 26th goal of the season, Madrid never looked like finding a winner.

"It looks like we do not have much confidence," Zidane said. "We have to give a little bit more."

Instead, they sit four points behind Atletico Madrid and finishing second, and above their city rivals, appears unlikely. Leganes climb to 11th.

Zidane was asked last month about the humiliation of playing on a Monday night, the time typically reserved for La Liga's sides not involved in European competitions and so unpopular that it will be abolished next season.

It meant as Barcelona were preparing to face Manchester United in the Champions League quarter-finals on Tuesday, Real Madrid stepped out looking to salvage only pride and, perhaps, momentum ahead of what most expect to be a busy summer.

Most of Zidane's press conferences have so far been dominated by questions about his players' futures and on this evidence, few will be feeling secure.

Benzema has been, by a distance, Madrid's most consistent player this season and he showed again why Zidane has already said the striker will stay. Gareth Bale, meanwhile, was left on the bench for the second time in three matches, with his prospects looking ever-more bleak.

"Today I wanted to make a change," Zidane said. "It is done."

Chances were few and far between in the first half but Madrid could twice have taken the lead as Marco Asensio scuffed his finish after being put through by Isco and Raphael Varane's shot was blocked after a goalline scramble.

Leganes, though, were otherwise rarely made to feel uncomfortable and shortly before half-time they took the lead. Madrid failed to clear, instead allowing Martin Braithwaite to roll back to Silva, who guided the ball into the corner.

Zidane strode down the tunnel at half-time and his team emerged with greater purpose afterwards, with Benzema finding an equaliser six minutes in.

Casemiro threaded a neat ball through to Luka Modric, who twisted and set free Benzema. His first shot was pushed out by Pichu Cuellar but only back to Beznema, who fired in the rebound.

Silva headed straight at Navas and Youssef En-Nesyri had a goal correctly ruled out for offside late on. Neither side really deserved a winner.

Karim Benzema Zinedine Zidane Football
Get the latest updates on India vs Australia Series, check out the India vs Australia Schedule for 2020-21 and Ind vs Aus live score . Like us on Facebook or follow us on Twitter for more sports updates. You can also download the NDTV Cricket app for Android or iOS.