Barcelona broke the resistance of 10-man Atletico Madrid on Saturday to go 11 points clear of their La Liga title rivals. 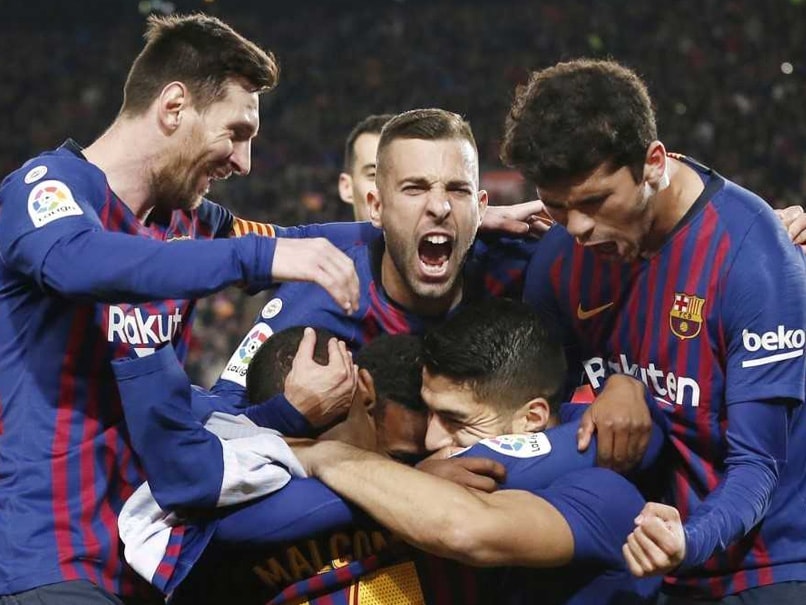 The victory leaves Barcelona almost out of sight with seven games left to play.© AFP

Luis Suarez and Lionel Messi scored twice in two minutes as Barcelona broke the resistance of 10-man Atletico Madrid on Saturday to go 11 points clear of their La Liga title rivals. Diego Costa was sent off in the 28th minute at Camp Nou after insulting referee Gil Manzano but while Atletico Madrid held on for almost another hour, Suarez and Messi struck late to seal a pivotal 2-0 win. The victory leaves Barcelona almost out of sight with seven games left to play and maintains momentum ahead of Wednesday's trip to Manchester United in the first leg of the Champions League quarter-finals.

"It is three crucial points," coach Ernesto Valverde said. "We are a little closer."

"It gives us a big margin," said Suarez. "We've taken not just one, but two steps forward."

Manchester United coach Ole Gunnar Solskjaer was in the crowd along with his assistant Mike Phelan but this was a familiar story of Barcelona's deadly duo delivering when it mattered most.

Costa's early and needless dismissal left Atletico needing snookers just to avoid defeat, let alone pull off the win that their coach Diego Simeone had said last week was the only result to keep their challenge alive.

"I asked the referee and he told me Costa said something to him," Simeone said. "Other players have said things and not been sent off but that does not justify what Costa did."

Suarez intervened with a superb long-range strike in the 85th minute, before Lionel Messi added a second in the 86th. The pair have now scored 53 league goals between them this season while for Messi, this was a record 335th La Liga victory.

Only a monumental collapse could now bring Atletico back into contention and more likely is Barca have earned themselves the luxury of resting players, around an even greater focus on success in Europe.

Antoine Griezmann, who decided against joining Barcelona last summer, was whistled as his name was read out before kick-off and he struggled for chances in what quickly became, after Costa departed, a contest of attack against defence.

Atletico seemed to be finding their way into the game when Manzano showed a red card to the Spaniard, who had pursued the referee and seemingly insulted him after a tangle with Philippe Coutinho.

A fuming Costa was escorted away by Gerard Pique and Barca took control. Jordi Alba had already hit the post after defence-splitting pass by Messi and Coutinho should have scored after a brilliant backheel by Suarez.

Messi came alive at the start of the second half as one shot was saved by the excellent Jan Oblak and another mesmeric run ended with a feathered pass to Suarez but again Oblak saved, this time with his foot.

Finally, the resistance of Atletico and their goalkeeper was broken as Barca scored twice in two minutes. The first was a peach as Suarez lined up a shot from 25 yards and whipped it past the left hand of Oblak into the bottom corner.

The second was a display of Messi magic, his weaving run from the right leaving both Jose Gimenez and Diego Godin on their backs. A tucked finish found its way in to finish off the game and, probably, Atletico too.

Luis Suarez Football
Get the latest updates on ICC T20 Worldcup 2022 and CWG 2022 check out the Schedule, Live Score and Medals Tally. Like us on Facebook or follow us on Twitter for more sports updates. You can also download the NDTV Cricket app for Android or iOS.