Italy were held to a 0-0 draw in front of 74,000 fans at the San Siro on Monday, as they were unable to overturn a 1-0 deficit from the first leg in Stockholm. 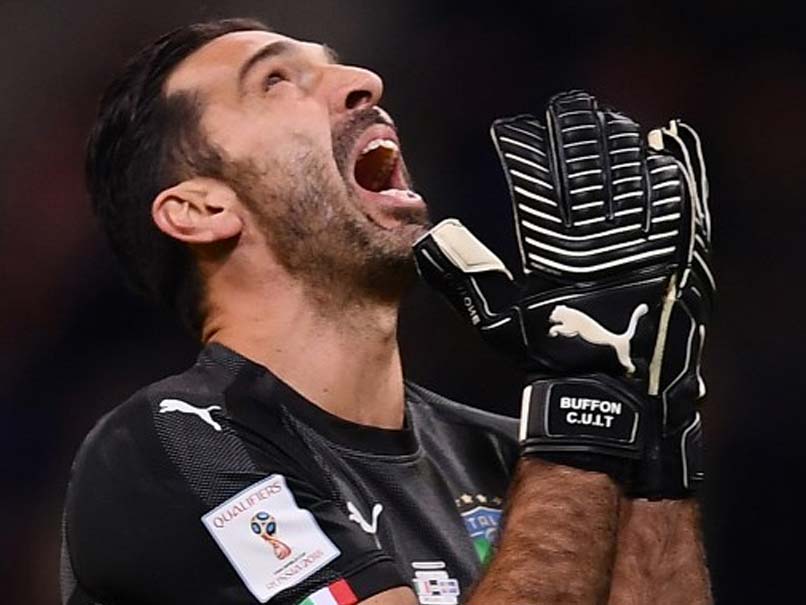 Veteran Italy goalkeeper Gianluigi Buffon expressed his sorrow as the four-time champions failed to qualify for the World Cup for the first time since 1958 following their 1-0 aggregate play-off defeat by Sweden. Italy were held to a 0-0 draw in front of 74,000 fans at the San Siro on Monday, as they were unable to overturn a 1-0 deficit from the first leg in Stockholm. "I'm not sorry for myself but all of Italian football," said the 39-year-old Buffon, who confirmed his international retirement after missing out on the chance to appear at a record sixth World Cup. "We failed at something which also means something on a social level. There's regret at finishing like that, not because time passes."

He added: "Those who've played know how hard these matches are. We weren't able to express ourselves at our best. We lacked the composure to score."

But the 2006 World Cup winner insisted the national team would rise again despite their absence from next year's tournament in Russia -- just the third edition without the Azzurri, after 1930 and 1958.

"There is certainly a future for Italian football, as we have pride, ability, determination and after bad tumbles, we always find a way to get back on our feet," said Buffon.

"I leave a squad of talent that will have their say, including (goalkeepers) Gigi Donnarumma and Mattia Perin. I thank the lads who were with us and, although it wasn't enough, I hope that we gave them something.

It was a tearful farewell for Italy legend Gianluigi Buffon, who had dreamed of bowing out with another record in a stellar career -- a sixth World Cup finals appearance.

Instead, his career finished not in Russia but with a humiliating World Cup playoff exit against Sweden at Milan's San Siro stadium, as Italy missed out on the finals for the first time in 60 years.

The charismatic 39-year-old had solidly represented the Azzurri for the past 20 years, earning a record 175 caps, but this time not even he could lift a second-rate Italy side.

The Azzuri drew 0-0 on Monday to lose 1-0 on aggregate, ending Buffon's brilliant international career which included the 2006 World Cup title.

He follows another legendary Italy and Juventus goalkeeper, Dino Zoff, who also departed the international scene after a defeat to Sweden.

"I'm not sorry for myself but all of Italian football," an inconsolable Buffon told Italian broadcaster Rai.

"We failed at something which also means something on a social level. There's regret at finishing like that, not because time passes."

The defeat represents the end of a generation with Andrea Barzagli, 36, and 34-year-old midfielder Daniele de Rossi, who also lifted the 2006 World Cup, also retiring from internationals, along with Buffon's Juventus team-mate Giorgio Chiellini.

"My Barzagli, my de Rossi, my Chiellini... they will leave as well, I think Leo Bonucci will continue. I say thanks to everyone, I don't want to steal the spotlight from anyone," said Buffon.

Fatefully, Buffon's long adventure with the national side finished as it had started -- at a World Cup playoff.

Under the snow of Moscow in 1997, Gianluca Pagliuca was injured and coach Cesare Maldini had no choice but to turn to the young Buffon.

"Do you feel like coming on?" he asked. Buffon played, he was good -- as almost always since -- and he was a fixture from then on, first as a substitute, then number one goalkeeper and finally captain.

In addition to winning eight Serie A titles with Juventus, Buffon was key to Italy's World Cup triumph in Germany when he conceded just twice in seven games -- a record he shares with Spain's Iker Casillas and France's Fabien Barthez.

Buffon also remains the only goalkeeper to win the UEFA player of the year award.

His two desperate corner kicks in injury time on Monday are images that will be remembered, along with his tears and his manner of belting out the Italian national anthem, eyes closed and crushing the shoulders of his neighbour.

"I was lucky to play my entire career with him, at Juventus and the national side," said Chiellini.

"There's no doubt that sometimes I don't even realise what it means to be in front of such a strong goalkeeper. Sometimes it seems simple but it's only because it's him."

Despite his trademark stubble showing the odd fleck of grey, the advancing years are having little effect on the reflexes, and ambition, of the evergreen Buffon.

Buffon, whose mother was a discus thrower and father a weightlifter, made his Serie A debut with Parma, winning the Italian Cup, the Italian Super Cup and the UEFA Cup before joining Juventus for 51 million euros in 2001 and going on to become a club legend with his eight Serie A titles.

A true workhorse, he has constantly progressed technically and has lost almost none of his extraordinary physical capabilities.

He became a goalkeeper at only 12 years old, having started off as an offensive midfielder, and approaching 40 years, Buffon remains one of the best in the world in his position.

Above all, his charisma, his experience and his measured way of expressing himself have made him a senior figure in Italian football.

The Juventus captain, who has already said he will likely retire from all football at the end of this season, said Italy fans still have plenty to look forward to, with AC Milan's 18-year-old 'keeper Gianluigi Donnarumma set to take the international number one shirt.

"There is certainly a future for Italian football, as we have pride, ability, determination and after bad tumbles, we always find a way to get back on our feet," he added.

"I leave a squad of talent that will have their say, including Gigio Donnarumma and (Genoa 'keeper) Mattia Perin."

He has one final ambition with Juventus: to win the Champions League, after finishing runners-up twice in the past three years.

Comments
Topics mentioned in this article
Italy Sweden Gianluigi Buffon Football
Get the latest updates on IPL 2021, IPL Points Table , IPL Schedule 2021 , live score . Like us on Facebook or follow us on Twitter for more sports updates. You can also download the NDTV Cricket app for Android or iOS.