The Netherlands, United States, Ghana and now Italy, a four-time champion and a pillar of soccer for almost a century, all will be absent from the 2018 tournament. 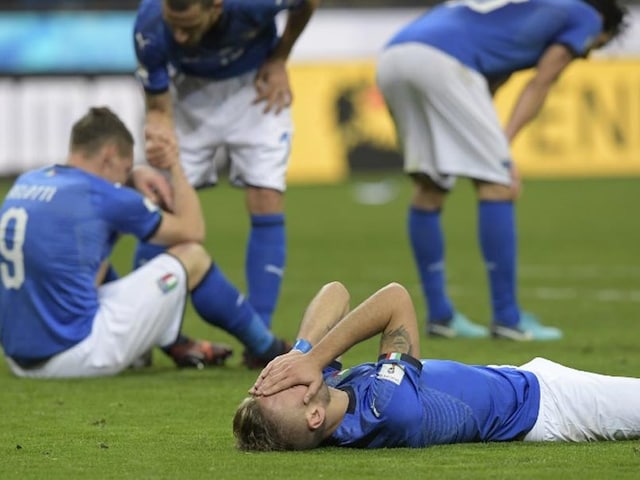 Italy failed to qualify for the World Cup© AFP

Italy will miss the World Cup for the first time since 1958, an astounding development in an autumn full of qualifying failures. The Netherlands, United States, Ghana and now Italy, a four-time champion and a pillar of soccer for almost a century, all will be absent from the 2018 tournament. Amid boos and whistles Monday in Milan, the Italians were ousted by Sweden, which repelled a second-half deluge for a 0-0 draw in the second leg of a two-game playoff to secure a 1-0 aggregate victory in the World Cup qualifier.

In the fifth minute of stoppage time, with San Siro stadium begging and pleading for a goal to force an extra 30 minutes, Alessandro Florenzi kissed the ball repeatedly as he prepared to take a corner kick. Sweden stood firm. The referee's whistle sounded.

Yes, Italy - the soccer country of class and grace, of revered goalkeepers and a defensive system known as catenaccio, or "the chain," of the iconic Serie A league, of Baggio and Maldini, Del Piero and Buffon, of those gorgeous blue jerseys - will not journey to Russia next summer for the 32-team tournament.

"I'm not sorry for myself but all of Italian football," said goalkeeper Gianluigi Buffon, 39, who was seeking to play in a sixth World Cup. "There is certainly a future for Italian football, as we have pride, ability, determination and after bad tumbles, we always find a way to get back on our feet."

Only Brazil (20) and Germany (16) have appeared in more World Cups than Italy (14). The last time the Italians failed, a Brazilian teenager named Pele was preparing for his first World Cup and Brazil, the greatest success the sport has ever seen, had yet to win its first global title.

The 2018 tournament will instead include tiny newcomers Iceland and Panama.

Sweden, which qualified for the first time since 2006, became the 29th team to punch a ticket to Russia. The last three slots will be decided this week: Ireland or Denmark on Tuesday, Australia or Honduras on Wednesday, and Peru or New Zealand on Wednesday.

Since winning the 2006 World Cup in Berlin, Italy has faltered on the global stage. In both 2010 and 2014, the Azzurri failed to escape the tournament's group stage. Seven years ago in South Africa, they managed just two points in a weak quartet and finished behind New Zealand. Four years later in Brazil, the favored Italians and English gave way to Costa Rica and Uruguay.

The 2018 qualifying campaign went about as expected with Italy finishing second behind Spain in Europe's Group G. A home draw with the Spaniards and 3-0 defeat in Madrid all but relegated Italy to the playoffs.

The Italians were favored to get past Sweden, but a 1-0 away defeat Friday put them under immense pressure in the return leg. Questionable officiating cost opportunities for both teams to crack the deadlock and, as the match wore on, Sweden slipped deeper and deeper into a defensive bunker and wasted precious seconds at every opportunity.

Within an hour of the match ending, Coach Gian Piero Ventura resigned.

Italy isn't only notable team to miss this World Cup.

The Netherlands, who lost to Spain in the 2010 final and finished third in 2014, didn't even advance to the European qualifying playoffs after yielding to France and Sweden in Group A.

Chile, the Copa America champion in 2015 and '16, finished sixth in a continental race that issued four automatic berths and one pass to a playoff. The United States lost at lowly Trinidad and Tobago on the last day of CONCACAF qualifying to finish fifth among six teams and fail to qualify for the first time since 1986.

Ghana had become an African power, reaching the round of 16 in 2006 and quarterfinals in 2010, but despite favored status in a mild four-team group, the Black Stars were third behind Egypt and Uganda. (The Egyptians advanced for the first time since 1990.)

Back in September, Carlo Tavecchio, president of the Italian soccer association, said that "not qualifying would be an apocalypse."

These aren't end times for Italian soccer - or calcio, as they call it there - but for days, weeks and months on end, it's going to feel like it.

(Except for the headline, this story has not been edited by NDTV staff and is published from a syndicated feed.)
Comments
Topics mentioned in this article
Italy Football Sweden Gianluigi Buffon
Get the latest Cricket news, check out the India cricket schedule, Cricket live score . Like us on Facebook or follow us on Twitter for more sports updates. You can also download the NDTV Cricket app for Android or iOS.