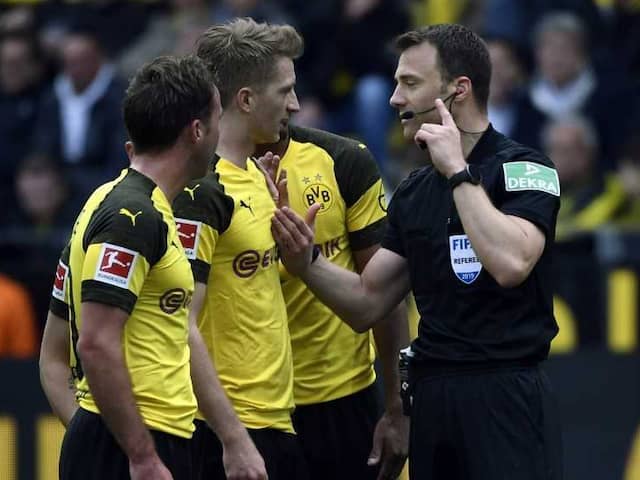 Captain Marco Reus admitted that the Bundesliga title was slipping from Borussia Dortmund's grasp after he was sent off in a shock 4-2 derby defeat to Schalke on Saturday. The defeat severely harmed Dortmund's title hopes, handing Bayern Munich the chance to go four points clear with three games to go when they play Nuremberg on Sunday. "As long as we are not winning our games, it will be hard to catch Bayern," said Reus. Dortmund coach Lucien Favre also said that he had given up hope of catching league leaders Bayern.

"The title race is over," he said. "I have never experienced anything like this."

"It is very, very hard to accept, especially the way we lost today."

"We are not used to getting red cards, and it was difficult after that."

Reus' red card, given for a reckless foul on Schalke's Suat Serdar, proved a turning point in Saturday's disastrous defeat, as Daniel Caligiuri put Schalke 3-1 up from the resulting free-kick.

Team mate Marius Wolf was also sent off for a similar challenge on Serdar, but it was an entirely different refereeing decision which caused controversy after the game.

Favre was left furious about a handball decision against Julian Weigl which allowed Schalke to equalise with a penalty after Dortmund had taken an early lead.

Favre called the recent adjustments to the handball rule "a disgrace" and "the biggest scandal in football".

"I was a player for 15 years and have been a coach for a long time," he said.

"Whoever invented this rule has obviously never played the game. It has nothing to do with football."

The English youngster appeared to be hit in the face by an object thrown from the away block as Dortmund celebrated their opener, and briefly left the pitch for treatment.

The Dortmund coach said that Sancho was not back in position by the time Schalke were given the penalty at the other end.

"It is very difficult to accept this defeat. For me, it is clear that the title race is done," said Favre.

"Obviously we wanted to win every game and live our dream, but I am not giving up hope yet," he said.

"A derby defeat is always bitter but it is extremely so in this situation."

"We need to let the defeat sink in. We have three games to go, which we want to win. Then we'll see where we are."