Hosts UAE scored in either halves of the match to beat India in the Group A match of the AFC Asian Cup 2019. 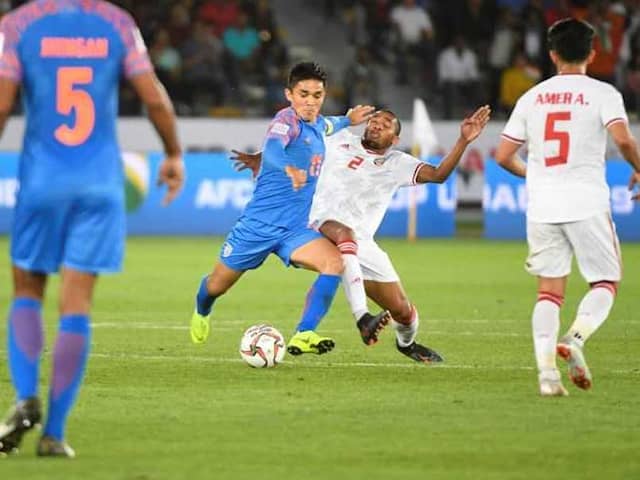 Sunil Chhetri did not look up to the mark against the match against UAE.© AFP

India paid the price for not making the most of their chances as they lost 0-2 to hosts United Arab Emirates at the Zayed Sports City Stadium in Abu Dhabi in the AFC Asian Cup 2019 on Thursday. By the virtue of the victory, UAE dethroned India to take the top spot in Group A with four points while India slipped to second spot with three points. For the hosts, Khaflan Mubarak (41st minute) and Ali Ahmed Mabkhout (88th) scored in either halves to put the game beyond India's reach.

United Arab Emirates had defeated India 2-0 in their previous meeting at the Asian Cup. It was in the group stages of the 1984 tournament.

In the first-half, India created plenty of chances with forward Ashique Kuruniyan creating all sorts of problems for the hosts. Centre-back Sandesh Jhingan too came close to scoring from a corner that was delivered by Anirudh Thapa.

UAE, on the other hand, were largely restricted counter-attacks as India piled on the pressure

Much against the run of play Mubarak scored through a right footed shot, assisted by Mabkhout to give the hosts the lead in the 41st minute. In the final minutes of the first-half, UAE continued to create more chances.

At half-time, UAE went into the tunnel with a slender 1-0 lead.

In the second-half, Indian coach Stephen Constantine made a change early to his side, replacing Halicharan Narzary with Jeje Lalpekhlua.

India started on the attacking foot in the final 45 minutes as well. The half saw Indian talisman Sunil Chhetri and star forward Jeje missing out on converting a free-kick from close range.

However, Mabkhout put the game to bed with a right-foot shot from the centre of the box that ended in the bottom left corner that sealed all three points for the hosts. The goal was assisted by Ali Hassan Salmin.

India will next face Bahrain on January 14.

India Sunil Chhetri Jeje Lalpekhlua Football
Get the latest updates on IPL 2020, check out the IPL Schedule for 2020 and Indian Premier League (IPL) Cricket live score . Like us on Facebook or follow us on Twitter for more sports updates. You can also download the NDTV Cricket app for Android or iOS.