Suryakumar scored 117 runs off 55 balls on Sunday. His innings was laced with 14 fours and six sixes as the batter toyed with the England bowlers to score boundaries at will. 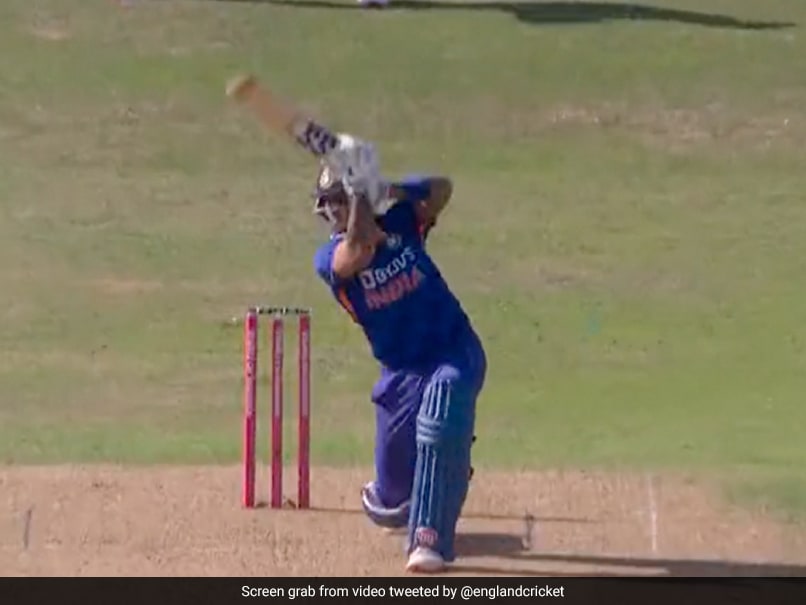 Suryakumar Yadav plays a lofted inside-out shot for a six against England in third T20I on Sunday.© Twitter

Suryakumar Yadav's maiden international century on Sunday went in vain as India lost the third and final T20I against England at Trent Bridge, Nottingham. Batting first England posted 215/7 and stopped India 17 runs short of their total. While other Indian batters struggled to score runs, Suryakumar was the star of the show and he almost single-handedly won the game for India. However, the batter lacked support from the other end and that saw the guests eventually losing the game despite a good fight.

Suryakumar scored 117 runs off 55 balls on Sunday. His innings was laced with 14 fours and six sixes as the batter toyed with the England bowlers to score boundaries at will. Among the many excellent shots Suryakumar played during the knock, an inside-out lofted shot over backward point for a six became the cynosure of all eyes. England pacer Richard Gleeson bowled a fuller delivery to Suryakumar on middle stump and the batter hit it for a six over backward point using his wrists.

Such was the brilliance of the shot that even the official Twitter handle of England Cricket could not stop themselves from sharing the video of the shot.

Talking about the match, Dawid Malan's 77 off 39 and Liam Livingstone's unbeaten 42 off 29 helped England post 215/7 in the stipulated 20 overs. For India, Ravi Bishnoi was the pick of the bowlers with figures of 2/30, while Harshal Patel returned 2/35.

In reply, India were stopped at 198/9 despite Suryakumar's century as other batters failed to play noticeable knocks. Reece Topley shone in the second innings with figures of 3/22, while David Willey and Chris Jordan claimed two wickets apiece.

England Cricket Team England vs India, 2022 England vs India, 3rd T20I Dawid Malan Reece Topley Ravi Bishnoi
Get the latest updates on Fifa Worldcup 2022 and check out  Fifa World Cup Schedule, Stats and Live Cricket Score. Like us on Facebook or follow us on Twitter for more sports updates. You can also download the NDTV Cricket app for Android or iOS.