India batsmen Rohit Sharma and Cheteshwar Pujara are being assessed by the BCCI's medical team after the duo picked up knocks during the Oval Test. 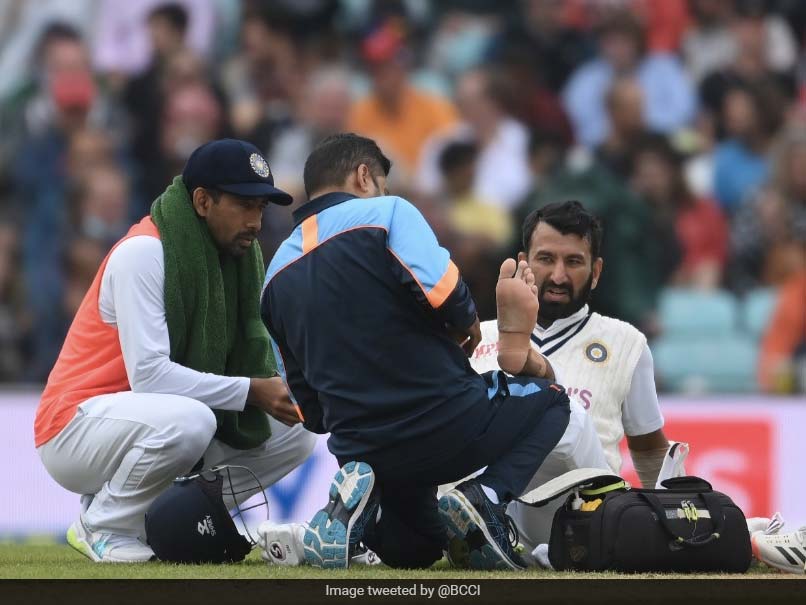 Cheteshwar Pujara had twisted his ankle while batting on the third day of the Oval Test.© Twitter

India batsmen Rohit Sharma and Cheteshwar Pujara are being assessed by the BCCI's medical team after the duo picked up knocks during the ongoing 4th Test at the Oval. The BCCI announced on its Twitter account that both players won't be able to take the field on the fourth day of the Test after India posted 466 in their second innings and set a target of 368 runs for hosts England to chase on Sunday. "UPDATE -  Rohit Sharma and Cheteshwar Pujara will not take the field," BCCI tweeted.

"Rohit has discomfort in his left knee while Pujara has pain in his left ankle. The BCCI Medical Team is assessing them," it added in the tweet.

Rohit had hit his first ever overseas century in Test cricket on Saturday as he combined with Cheteshwar Pujara, who scored 61, to help India dominate proceedings on the third day of the Test.

During his half-century on Saturday, Pujara had twisted his ankle on the pitch while completing a run and had to receive medical attention on the field. He, however, continued his innings subsequently.

India, who had been bowled out for 191 in the first innings, had subsequently restricted England to 290. Needing a big total in their second innings, India rode on Rohit's ton to post 466.

It was Shardul Thakur's second fifty in this Test on Sunday, aided by a half-century from Rishabh Pant, that helped India extend their lead on the fourth day of the match.

Cheteshwar Pujara Rohit Sharma Cricket
Get the latest updates on T20 World Cup, check out the T20 World Cup Schedule and Live Score . Like us on Facebook or follow us on Twitter for more sports updates. You can also download the NDTV Cricket app for Android or iOS.