"That Language Will...": Stuart Broad On Virat Kohli's Spat With James Anderson On Day 4 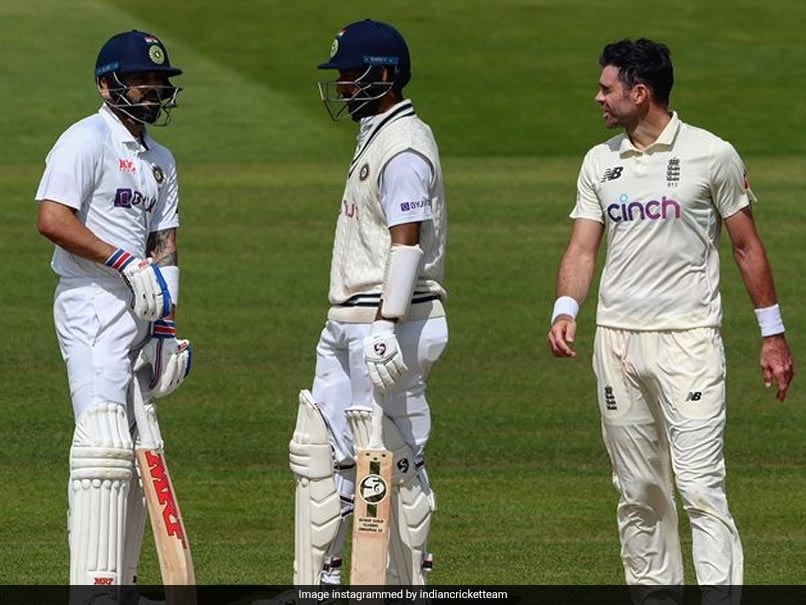 Virat Kohli and James Anderson in a heated exchange during Day 4 of Lord's Test.© Instagram

India captain Virat Kohli and veteran England pacer James Anderson were involved in a verbal exchange during Day 4 of the second Test match between India and England. A video went viral on social media in which Kohli can be heard telling Anderson that this (Lord's cricket ground) is not his backyard. Reacting to the incident, Stuart Broad, who was ruled out of the ongoing Test series, reminded fans of Anderson's five-wicket hauls at Lord's, saying that the honours board at the venue suggests it is his "actual backyard".

"The Lord's honours board suggests it's as close to Jimmy's backyard as Jimmy's actual backyard. Love the fire but that language will have him in trouble," Broad tweeted.

The Lord's honours board suggests it's as close to Jimmy's backyard as Jimmy's actual backyard. Love the fire but that language will have him in trouble

On Sunday, Kohli was looking good during his short stay at the crease before Sam Curran dismissed him for 20. Kohli edged one straight to Jos Buttler, leaving India tottering at 55 for three.

Cheteshwar Pujara and Ajinkya Rahane then put on a 100-run stand for the fourth wicket to bail the visitors out of trouble.

Mark Wood removed Pujara for 45 with a ball that jumped off the good length area while Moeen Ali dismissed Rahane for 61.

Moeen struck again to castle Ravindra Jadeja for just three to put the pressure back on India.

India were 181 for six with Rishabh Pant out in the middle batting on 14 before bad light forced early Stumps on Day 4.

The visitors have a lead of 154 runs with four wickets in hand.

Stuart Broad England vs India, 2021
Get the latest updates on Fifa Worldcup 2022 and check out  Fifa World Cup Schedule, Stats and Live Cricket Score. Like us on Facebook or follow us on Twitter for more sports updates. You can also download the NDTV Cricket app for Android or iOS.