England vs India: India finished Day 1 of the 2nd Test at Lord's at 276/3 with KL Rahul unbeaten on 127 and Rohit Sharma hitting a fine 83 after England opted to field. 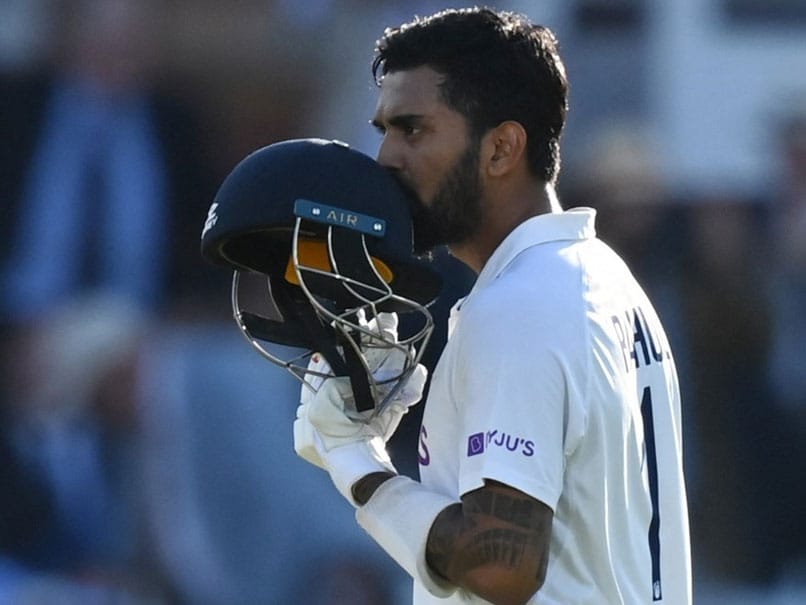 KL Rahul gave England a lesson in how to bat in tough conditions with the opener's composed unbeaten century leaving India well-placed on 276-3 at stumps on the first day of the second Test at Lord's on Thursday. Rahul was initially outshone by Rohit Sharma, who made 83 in their fine stand of 126 -- the first century partnership by an overseas opening pair in a Test in England since 2016, when Sri Lanka's Dimuth Karunaratne and Kaushal Silva also achieved the feat at Lord's.

But, while patient in defence and showing good judgement in leaving balls outside off stump, Rahul was still 127 not out at the close, having batted out the day.

Together with India captain Virat Kohli, he shared a third wicket stand of 117.

One consolation for England was what the new ball did for star batsman Kohli, out for an increasingly fluent 42 before stumps after edging Ollie Robinson to opposing captain Joe Root at first slip.

Ajinkya Rahane was one not out after India decided against sending in a nightwatchman.

Earlier, Rahul drove Mark Wood through the covers for four to go to 98 before a late cut boundary off the fast bowler -- the ninth four of his innings -- saw him to a 212-ball hundred that also included a six against recalled spinner Moeen Ali, one of three changes to England's XI.

His sixth century in 38 Tests, and third against England, followed Rahul's 84 in last week's rain-marred drawn series opener in Nottingham.

That match saw the 29-year-old Rahul make his return to Test cricket after a near two-year absence after Mayank Agarwal was hit in the head batting in the Trent Bridge nets.

Once again, Rahul demonstrated resolute skill beneath overcast skies and on a green-tinged pitch that appeared to favour England's four-man pace attack.

It was no surprise when Root, the only England batsman to pass fifty at Trent Bridge with innings of 64 and 109, decided to field first after winning the toss.

But he would have hoped for more than three wickets in the circumstances, with England great James Anderson removing both Rohit and Cheteshwar Pujara in a return of 2-52 in 20 overs.

There had been fears a thigh problem would mean Anderson, England's all-time leading Test wicket-taker, would be unfit to take his place in an England attack already missing Stuart Broad after his longstanding new-ball partner had been ruled out of the rest of this five-match series with a calf injury.

Rohit was watchful against the new ball duo of Anderson and Robinson, taking 46 balls to score his first eight runs.

But, bolstered by a correct defence, he scored 43 runs off his next 37 deliveries.

Rohit completed an 83-ball fifty including eight fours before hooking an 88 mph delivery from Wood, recalled in place of Broad, for six.

When India reached 100, Rohit was 75 not out, having hit four fours in one over from left-arm swing bowler Sam Curran -- with Rahul trailing behind on 16 not out.

But Rohit's tempo decreased the pressure on Rahul to score quickly and although it took him 108 balls for his first boundary on Thursday a straight six off Moeen was worth the wait.

Anderson eventually had his 622nd Test wicket when, having moved a couple of deliveries away from Rohit, he bowled him with one that jagged back.

It needed a high-class delivery to dislodge Rohit who could be proud of a 145-ball innings featuring 11 fours and a six.

James Anderson Ollie Robinson Cricket
Get the latest updates on ICC T20 Worldcup 2022 and CWG 2022 check out the Schedule, Live Score and Medals Tally. Like us on Facebook or follow us on Twitter for more sports updates. You can also download the NDTV Cricket app for Android or iOS.