Yuvraj Singh smashed 49 not out off just 20 balls, a knock that included four sixes in an over off West Indies Legends' Mahendra Nagamootoo. 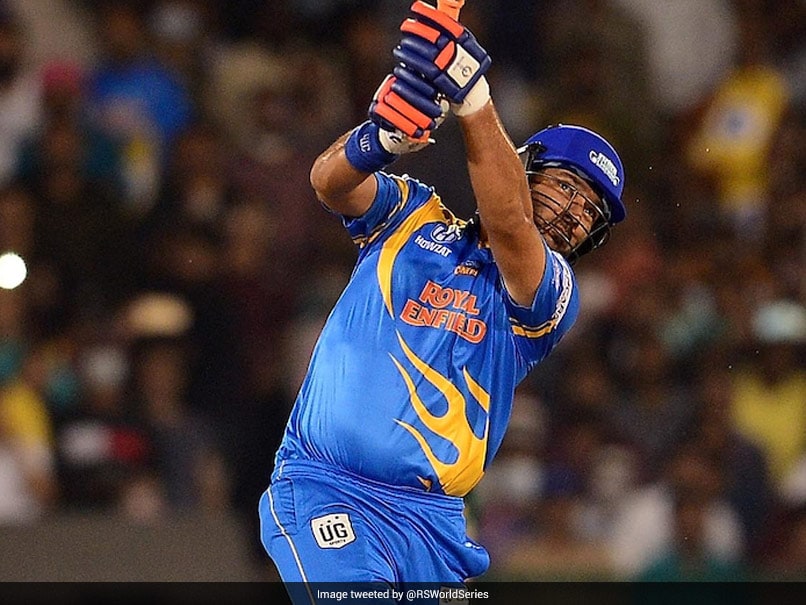 Yuvraj Singh rolled back the years with his knock of 49 not out off just 20 balls.© Road Safety World Series/Twitter

Yuvraj Singh turned back the clock in the semi final of the ongoing Road Safety World Series by hitting 49 not out off just 20 balls against West Indies Legends on Wednesday. Yuvraj's knock comprised of 1 four and 6 sixes as he tore into the West Indies bowling attack after captain Sachin Tendulkar had set-up a platform for the death overs with his 65 off 42 balls. Yuvraj hit Mahendra Nagamootoo for four sixes in five balls in the 19th over and at one point looked set to repeat his feat of six sixes in an over that he hit off Stuart Broad in 2007 T20 World Cup.

Yuvraj hit two more sixes off Sulieman Benn in the final over as India Legends raced away to 218 for 3, the highest score in the tournament thus far.

Earlier, opening batsman Virender Sehwag was at his characteristic best as he hit 35 off 17 balls with five fours and one six.

Sehwag and Tendulkar added 56 runs for the first wicket inside the Powerplay and even though Mohammed Kaif was subdued with 27 off 21, Yusuf Pathan (37 not out off 20) and Yuvraj gave India a big finish.

Yuvraj came into this match in some good form after having hit 52 not out off just 22 balls against South Africa Legends.

He had hit two fours and six sixes in that innings and carried on from where he had left, in the all-important semi-final.

Sri Lanka Legends will play South Africa Legends in the second semi-final on March 19 in Raipur.