West Indies vs Australia: Chris Gayle scored 67 runs off 38 balls on Tuesday, as the West Indies beat Australia by six wickets in the third T20I. 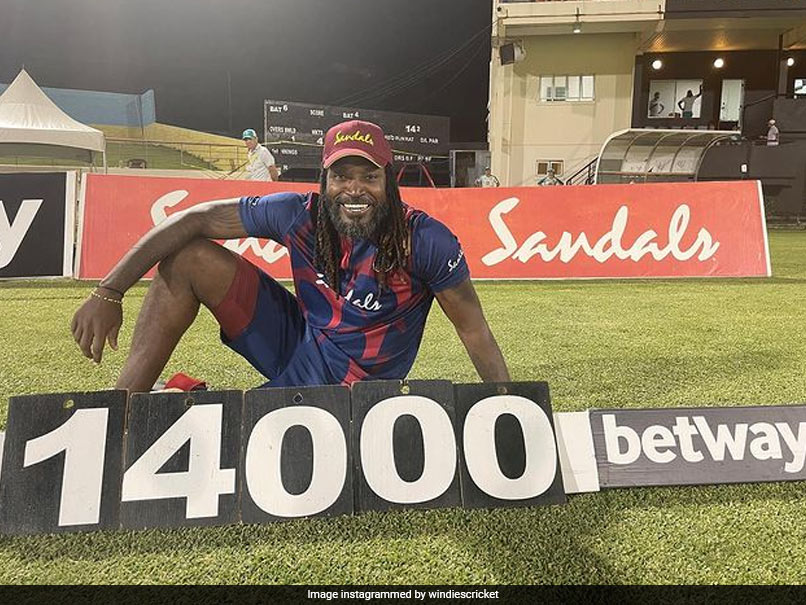 Swashbuckling batsman Chris Gayle has added yet another feather to his already illustrious career. The self-proclaimed 'Universe Boss', on Tuesday, become the first-ever batsman to breach the mark of 14,000 runs in T20s. He achieved the feat during the third T20I match between the West Indies and Australia in St Lucia. Gayle roared back to form as the West Indies beat Australia by six wickets to take an unassailable lead of 3-0 in the ongoing five-match T20I series. It was Australia's fourth straight series loss in T20Is. The International Cricket Council (ICC) also celebrated Gayle's feat by sharing an infographic of the batsman on Instagram.

"Going where no one has gone before! Chris Gayle is the first player to pass 14,000 runs in T20 cricket," ICC captioned the post.

Former Australia cricketer Michael Bevan was among the first few to like the post. He also extended his wishes to the left-handed batsman on achieving the special feat.

ICC also posted a photo of Gayle on its Twitter handle to mark his achievement. Needless to say, the comments section was flooded with appreciation.

While one user felt in "Chris Gayle's world" the rest of us are "just side characters", another called him a "pathbreaker and one of a kind".

It's Chris Gayle's world and we're just side characters here.

Chris Gayle is a pathbreaker and one of a kind. What an amazing cricketer, and one of the greatest T20 player!

Here are a few more reactions:

The big Man is back, what an whirlwind inning, pleasure to the eyes #WIvAUS

Gayle smashed 67 runs off 38 balls as he became the first cricketer to breach the 14,000-run mark in T20 cricket. Interestingly, it was also Gayle's highest score in T20Is since 2016.

The 41-year-old, who has scored just 41 runs in his last five innings, was not able to score a single run off his first three deliveries in the match off Mitchell Starc's bowling.

However, after that, he blasted 18 runs off the next four deliveries bowled by Josh Hazlewood. Gayle also targeted leg-spinner Adam Zampa, as he scored 22 runs off six balls and raced to his fifty. Gayle was removed by paceman Riley Meredith when he was on 67.

Batting first, Australia scored 141 runs for the loss of six wickets in their allotted 20 overs. West Indies won the match by six wickets in 14.5 overs.

The 4th T20I between the West Indies and Australia is slated to take place on Thursday at the Daren Sammy National Cricket Stadium, Gros Islet, St Lucia.

Chris Gayle Cricket
Get the latest updates on IPL Auction 2023 and check out  IPL 2023 and Live Cricket Score. Like us on Facebook or follow us on Twitter for more sports updates. You can also download the NDTV Cricket app for Android or iOS.