Virat Kohli praised the way Rishabh Pant built his innings and went on to finish the game. 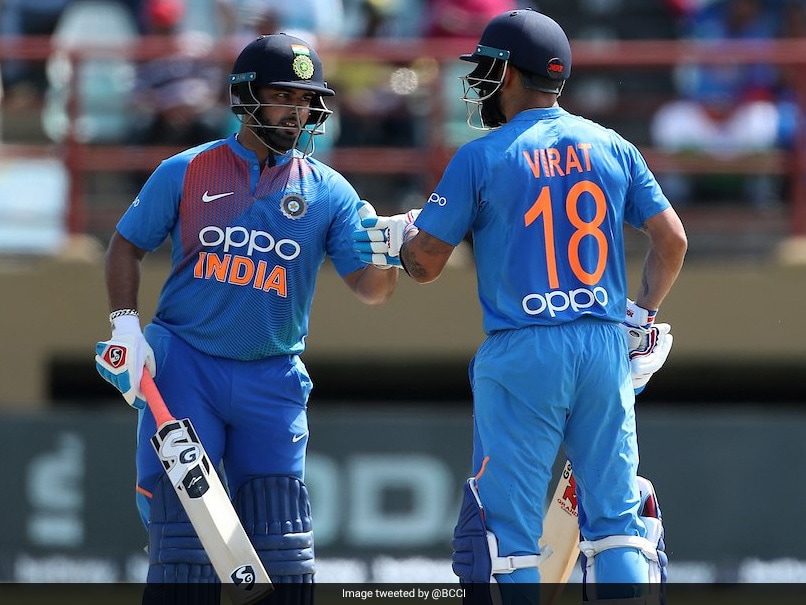 India completed a clean sweep over the West Indies after winning the third and final Twenty20 International (T20I) by seven wickets in Guyana on Tuesday. Indian skipper Virat Kohli and young wicket-keeper Rishabh Pant starred with the bat, helping India achieve the 147-run target with five balls to spare. Rishabh Pant, who threw his wicket away cheaply in the first two T20Is, rose to the occasion and proved his mettle, stitching a 106-run partnership with skipper Virat Kohli.

Kohli praised the way Rishabh Pant built his innings and went on to finish the game. He even said that they are "looking at Rishabh (Pant) as the future".

"We are looking at Rishabh as the future, definitely. Got a lot of skill and talent. It's about winning and finishing games like these. In International cricket, you need to tackle pressure differently," Kohli said at the post-match presentation.

"He has come a long way since he's started. If he plays like this regularly, we will see his potential shine for India," Kohli added.

Earlier, Kohlielected to bowl after winning the toss and Deepak Chahar proved him right by claiming three quick wickets. Playing his first game of the series, Chahar won the Man of the Match award as he dismissed West Indies' top-three batsmen Sunil Narine, Evin Lewis and Shimron Hetmyer inside four overs. He conceded just four runs in his three-over spell.

"Deepak is similar to Bhuvi. With the new ball, Deepak's skill is up there with Bhuvi. Swing has been his USP in the IPL too. Really lethal with the new ball. He puts the batsmen in real trouble," Kohli praised Deepak Chahar.

Despite resting some of the key players, the manner in which India dominated the game made Kohli term it as a "clinical performance".

"Clinical performance. We wanted to try out players but priority was to win games. Deepak was great, Bhuvi professional as always. Much better wicket than in Miami. West Indies got to a decent total because of the wicket, but we were professional with both ball and bat," Kohli said.

"We want to be as professional as possible in the ODIs and Tests. We want results to win games of cricket. The West Indies ODI team is even stronger, so it will be hard work, but we will try to have fun as a team for a month," said Kohli.

The three-match ODI series will begin at the same venue on Thursday.

Rishabh Pant West Indies vs India 2019 West Indies vs India, 3rd T20I Cricket
Get the latest updates on India vs South Africa and check out  Schedule, Results and Live Score. Like us on Facebook or follow us on Twitter for more sports updates. You can also download the NDTV Cricket app for Android or iOS.