WBBL 2021: Richa Ghosh smashed 21 runs off just 14 balls but her most telling contribution came in the 2nd innings when she produced a "piece of magic" in the field to run out Melbourne Renegades captain Sophie Molineux. 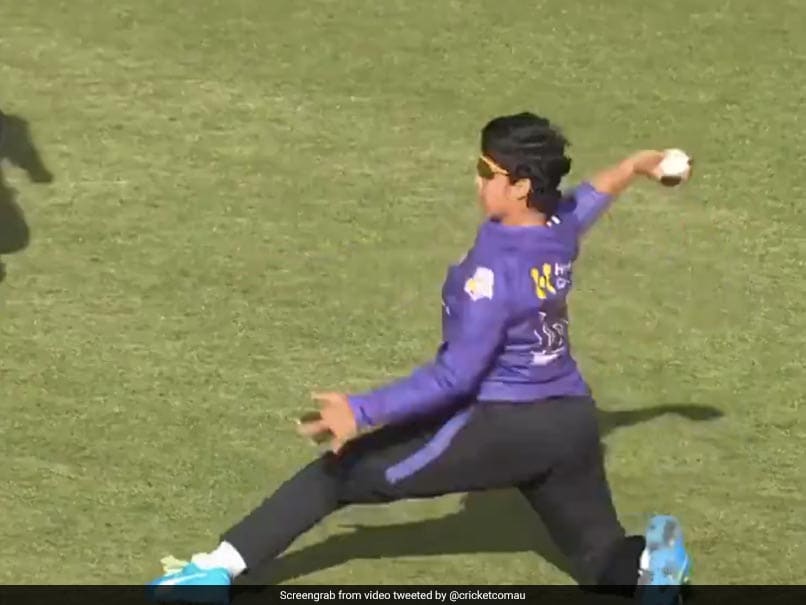 WBBL 2021: Richa Ghosh produced a stunning effort in the field to run out Sophie Molineux.© Twitter

Young Indian women cricketers put on a show in the recently-concluded series in Australia. Shafali Verma, 17, has already taken the cricketing world by storm through her batting exploits but there were a few others like Richa Ghosh, Pooja Vastrakar and Yastika Bhatia who impressed one and all with some terrific performances Down Under. India ran Australia close in their own backyard and the performances of these rising stars bodes well for women's cricket in the country. With the Australia series over, the attention for some turned to the Women's Big Bash League with as many as eight Indians taking part in the tournament. And on the second day of WBBL 2021 action, Indians are already making a significant impact.

The second match of WBBL 2021 on Saturday saw Melbourne Renegades Women take on Hobart Hurricanes Women at the Bellerive Oval in Hobart with three Indians on show.

Richa Ghosh, 18, hogged the limelight smashing 21 runs off just 14 balls, including two fours and a six, but her most telling contribution came in the second innings when she produced a "piece of magic" in the field to run out Melbourne Renegades captain and opener Sophie Molineux with a brilliant direct hit.

Richa Ghosh pulls out a piece of magic to run out Sophie Molineux! #WBBL07 | @CommBank pic.twitter.com/tdplV2yGPj

Earlier, Hobart Hurricanes won the toss and elected to bat. They made a solid start with Rachel Priest and Ruth Johnston adding 28 runs for the first wicket. Georgia Wareham accounted for Johnston in the fifth over while Mignon du Preez could only make 5 before she was sent packing Wareham.

In a spot of bother at 38 for two, Richa Ghosh walked into bat and provided the much-needed impetus to the Hurricanes innings but she was dismissed by compatriot Harmanpreet Kaur for 21 with the score at 73/4 in 11.4 overs.

It went downhill from there for the Hurricanes as they kept losing wickets at regular intervals. Naomi Stalenberg held one end up but ran out of partners with Wareham and Molineux running riot.

Eventually, Hobart Hurricanes stuttered to 121 all out of their 20 overs.

In reply, Melbourne Renegades got off to a solid start courtesy Molineux and India's Jemimah Rodrigues. Molineux's innings was cut short by Richa Ghosh's brilliance in the field. Rodrigues and Courtney Webb added 68 runs for the second wicket to put the Renegades firmly in control in the chase but both Rodrigues and Webb fell in the same over to give Hobart an inkling of hope.

Evelyn Jones could only make 4 before she was dismissed by Amy Smith with Richa Ghosh in the thick of things again.

With the Hurricanes starting to dream of an unlikely win, India captain Harmanpreet Kaur took centrestage and played a mature knock of 24 off 19 balls to get her team across the line with four balls and six wickets to spare.

Australia Women Cricket
Get the latest updates on IND vs NZ 2021, check out the Schedule and Live Score . Like us on Facebook or follow us on Twitter for more sports updates. You can also download the NDTV Cricket app for Android or iOS.