MS Dhoni has always been distinct in his approach to cricket and the Sri Lankans were keen to get some invaluable tips from the master. 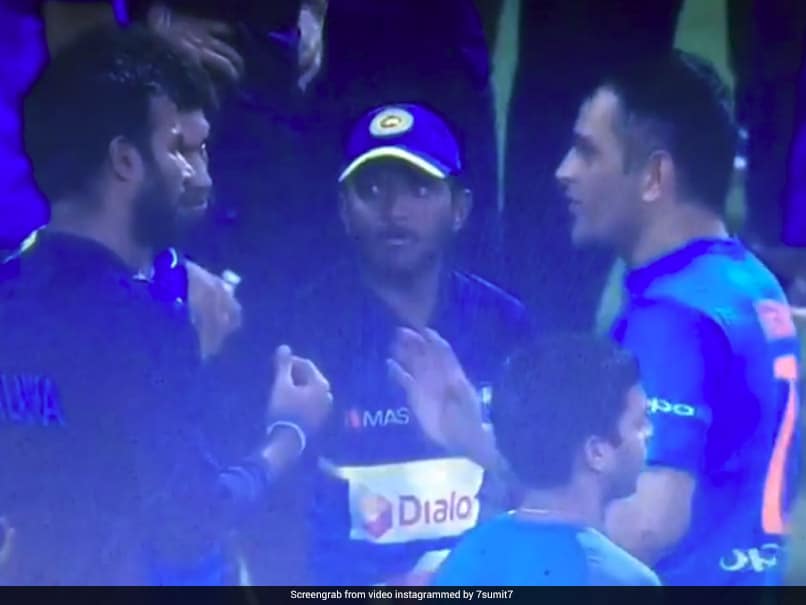 Mahendra Singh Dhoni is widely regarded as one of the best students of the game. Despite his unorthodox approach to cricket, his game awareness and street-smart ways have helped Dhoni stand apart right through his career. Apart from his batting and wicket-keeping skills, the former India captain brings experience and insights to table of the current Indian team. In a video that's now viral, Dhoni was seen imparting some of his cricket knowledge to Sri Lanka players after India's win in the 3rd T20I in Mumbai on Sunday. As the visitors' captain Thisara Perera was being interviewed by Sanjay Manjrekar, his players Upul Tharanga, Akila Dhananjaya and Sadeera Samarawickrama were seen listening intently as Dhoni dished out some batting tips.

After captain Virat Kohli and coach Ravi Shastri's backing, chief selector MSK Prasad too threw his weight around Dhoni, virtually confirming his ticket for the 2019 World Cup in England.

Prasad was effusive in his praise on Sunday.

"We are grooming some wicketkeepers during India A tours. But more or less, we have fixed up (our) minds till the World Cup (on continuing with Dhoni) and after that at later stages we will start grooming some of those (wicket-keepers).

"I think MS Dhoni still remains the No 1 wicket-keeper in the world and day in and day out we have been saying this. In the current T20 series (against Sri Lanka), the stumpings he has effected and caught-behind he has taken are phenomenal.

"There is no comparison and I don't see any wicket-keeper, who can even come closer to him in world cricket, leave alone Indian cricket," Prasad's statement more or less sealed the fate of all young keepers till the 2019 World Cup.

Comments
Topics mentioned in this article
India Cricket Team MS Dhoni Cricket Upul Tharanga Sri Lanka Cricket Team
Get the latest updates on ICC T20 Worldcup 2022, check out the Schedule and Live Score. Like us on Facebook or follow us on Twitter for more sports updates. You can also download the NDTV Cricket app for Android or iOS.