Jofra Archer, who pulled out of the IPL 2021 last week, has begun his rehabilitation after undergoing a finger operation. 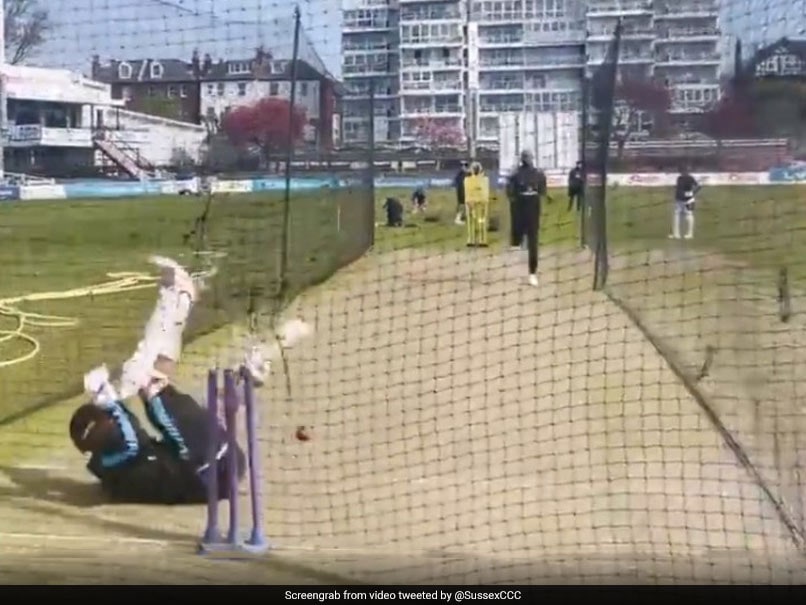 Jofra Archer bowled a nasty bouncer that left the batsman on all fours.© Twitter

England fast bowler Jofra Archer, after undergoing a finger operation, returned to training recently and seems like he has already started bowling in full rhythm, as if he never went away from the game. In a video tweeted by county side Sussex, the Rajasthan Royalspacer can be seen bowling with full force during a net session. Archer, known for his well-directed bumpers, bowls a nasty bouncer in the beginning of the video, leaving the batsman on all fours. Luckily, not much damage was done as the batsman was able to get away from the line of the ball just in time. However, while doing that the batsman lost his balance and was seen lying on the pitch.

How many runs would you get off this @JofraArcher over? pic.twitter.com/rWx3bkSpbo

Archer, who won the Most Valuable Player of the season award in IPL last year, pulled out of the ongoing edition after undergoing an operation to remove glass fragments from his middle finger on right hand.

Last week, the England and Wales Cricket Board released a statement to inform about Archer's withdrawal from the IPL 2021, currently taking place in India. The England cricket board said that they along with Sussex medical teams will continue to monitor his progress.

"Archer will now step up his training regime starting next week and will be in full training with Sussex. It is expected that he will return to cricket in the next fortnight if he can continue to bowl and prepare pain-free," the ECB said in a statement.

"The ECB will confirm which matches he is expected to play in due course."

Archer had suffered a cut to his hand while cleaning at his home in January shortly before flying to India to prepare for the Test series earlier this year.

Battling with the injury, Archer played in the two Test matches and five T20Is against India last month. However, he was ruled out of the three-match ODI series and returned to England for his operation.

Rajasthan Royals Cricket IPL 2021
Get the latest updates on ICC T20 Worldcup 2022, check out the Schedule and Live Score. Like us on Facebook or follow us on Twitter for more sports updates. You can also download the NDTV Cricket app for Android or iOS.