The two cricketing stalwarts recalled some funny incidents as well as serious cricket. 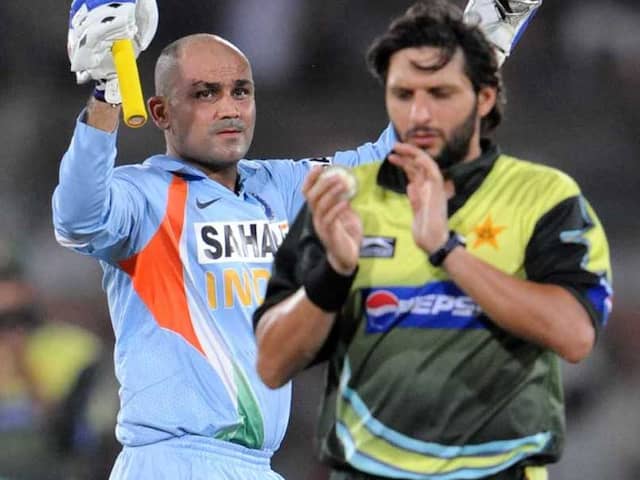 Former Indian opening batsman Virender Sehwag and Pakistan cricketer Shahid Afridi were known for their fearless and swashbuckling batting styles. Whenever these two stepped up to play for their respective countries, the opponent teams knew they would witness some unrelenting pressure. Whomsoever the opponent, both Virender Sehwag and Shahid Afridi instilled a kind of fear in them. Despite their bravado, these two also had their share of weaknesses. In a live video chat, Sehwag revealed the name of the bowler he dreaded facing. "If there is one bowler I was scared of it was Shoaib Akhtar. You didn't know which ball he would hit on your shoe and which one on your head. And he has hit many bouncers on my head. I was scared of him but had fun hitting balls from him too," he said.

Both Sehwag and Afridi also spoke at length about their favourite moments in their careers. Sehwag said India's World Cup triumph in the 2007 and 2011 was one of his favourites.

Meanwhile, Afridi said Pakistan's victory in the 2009 T20 World Cup was his favourite memory. "2009 World Cup was memorable for us because of the Sri Lanka incident that had happened and Pakistan cricket was struggling. That win was important to lift the spirits of our nation," he signed off.

Shahid Afridi Shoaib Akhtar Cricket
Get the latest Cricket news, check out the India cricket schedule, Cricket live score . Like us on Facebook or follow us on Twitter for more sports updates. You can also download the NDTV Cricket app for Android or iOS.