Virender Sehwag took to social media to share a video of T Natarajan receiving a warm welcome upon arrival at his village, with an interesting caption which indicated his reaction to the same. 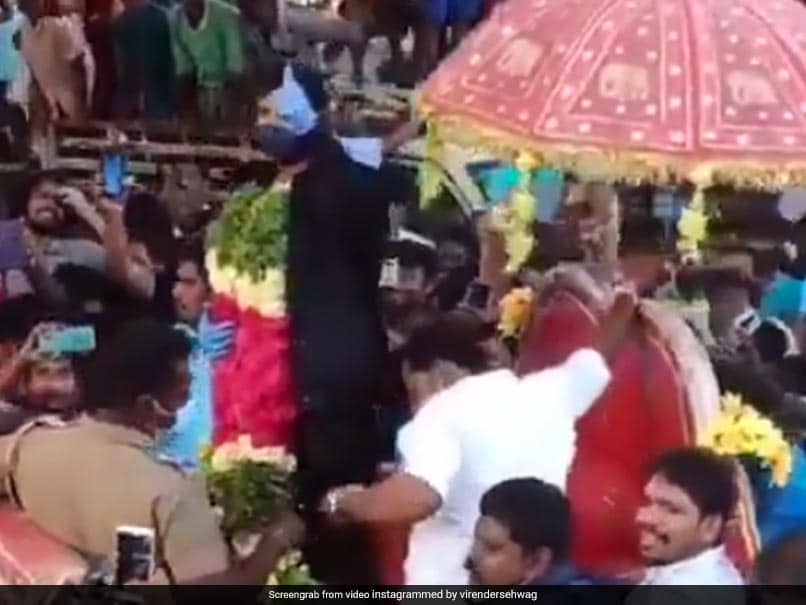 People cheered T Natarajan on as he proceeded in a makeshift chariot.© Instagram

Former India cricketer Virender Sehwag took to social media on Thursday to share a video of T Natarajan's grand welcome upon arrival back at his village. The left-arm pacer's arrival at Chinnappampatti village in Salem district following the conclusion of a four-match Test series in Australia, resulted in a lot of excitement. People cheered him on as he proceeded in a makeshift chariot. "This is aindia. Here cricket bis not just a game. It is so much more. #natarajan getting a grand welcome upon his arrival at his Chinnappampatti village in Salem district. What a story.#cricket #india," read the caption on the video posted by Sehwag on Instagram.

Natarajan registered three dismissals after being handed his Team India debut in the longest format of the game, in the final Test at The Gabba in Brisbane.

The visitors defeated Australia by three wickets in the Brisbane match, clinching the four-match series by a 2-1 margin.

Team India chased down a target of 328 runs with only three overs remaining in the final day's play. Rishabh Pant remained unbeaten on 89 with half-centuries from Shubman Gill and Cheteshwar Pujara.

The defeat brought an end to Australia's unbeaten run at The Gabba since 1988. West Indies' triumph against the hosts at the venue, had been followed by an unbeaten streak in 31 matches. While 24 matches ended up as wins, seven clashes finished as draws.

Natarajan earlier made his Team India debut in the shorter formats as well, during the three-match ODI and T20I series against Australia.