Virat Kohli is himself a fan of Cristiano Ronaldo's "energy and intensity" and doesn't shy away from rating the Portuguese footballer above Argentine star Lionel Messi. 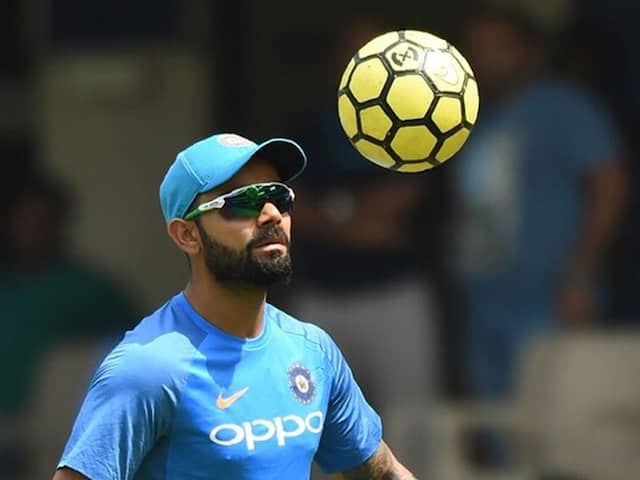 Virat Kohli's love for football, besides his passion for cricket, is now a well-known fact. The 30-year-old right-handed batsman has many records to his name and has his eyes firmly set on Sachin Tendulkar's astonishing record of 100 international centuries. Virat Kohli leads India from the front and inspires the players with his fitness and passion for the sport. However, India cricket team captain Virat Kohli is himself a fan of Cristiano Ronaldo's "energy and intensity" and doesn't shy away from rating the Portuguese footballer above Argentine star Lionel Messi.

When asked about his favourite footballer between Cristiano Ronaldo and Lionel Messi, Virat Kohli told The Times Of India: "Tough question. But I would say Cristiano is the most complete player that I have seen. Whether it's the left foot, right foot, speed or dribbling skills, he's amazing. I have not seen a better goal scorer," Kohli said.

"He revolutionised the sport and everyone followed him. His place is special, but if I had to take only one in my team who will give energy and intensity, it's Cristiano," he added.

The Ronaldo vs Messi debate is an ever-trending topic for football fans across the globe. Kohli didn't outrightly write off Messi from the debate, saying: "It's a personal preference. Messi is a freak, absolute natural talent, and his ability is second to none."

"For me, what stands out is the ability or the will to put in the effort in every single minute of the game. Ronaldo's drive separates him from everyone else. Playing at the top level, everyone has talent, but I don't think anyone has the will that he has," the Indian skipper added.

Kohli is currently engaged in India's ongoing home series against South Africa. After the three-match T20 International series ended in a 1-1 draw, India will host South Africa for the first Test of the three-Test series in Visakhapatnam on Wednesday.