Juventus have 16 points from six games, one ahead of Inter Milan, before Antonio Conte's side play at Sampdoria later on Saturday. 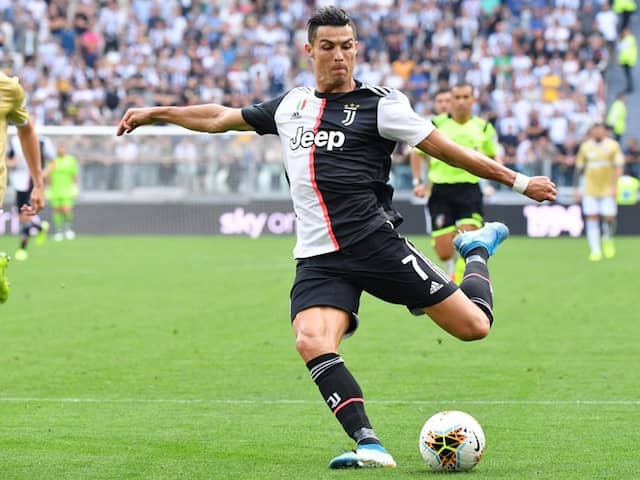 Cristiano Ronaldo returned from an injury scare to score as Juventus eased past struggling SPAL 2-0.© AFP

Cristiano Ronaldo returned from an injury scare to score as Juventus eased past struggling SPAL 2-0 to take top spot in Serie A on Saturday. Ronaldo notched up his third consecutive goal at home this season after 78 minutes in Turin to add to Miralem Pjanic's opener just before the break. Juventus have 16 points from six games, one ahead of Inter - the only team with maximum points - before Antonio Conte's side play at Sampdoria later on Saturday.

Cristiano Ronaldo was rested for the midweek win over Brescia as a precaution with a slight muscular problem ahead of Tuesday's Champions League game against Bayer Leverkusen in Turin and next weekend's clash with Inter at the San Siro.

"I've read they're doing well, but I had no doubts considering who their coach is. For now our thoughts are just on the Champions League match against Leverkusen."

Sarri said he was satisfied with his strike options in the run up to their second European game after a 2-2 draw to Atletico Madrid last time out.

"Dybala is important to us, Cristiano was lively, he had three or four chances. And let's not forget (Gonzalo) Higuain," said Sarri of the Argentine who was on the bench.

"I have three strikers who satisfy me whatever choice I make."

For second from bottom SPAL the damage could have been worse but for some fine saves from Albanian goalkeeper Etrit Berisha.

Berisha, on-loan from Atalanta, stopped Paulo Dybala's curling goal-bound effort just after half an hour, and then parried a point-blank Aaron Ramey header from a Ronaldo cross in front of goal.

Pjanic had a shot cleared off the line before connecting with a Sami Khedira assist to fire in from a distance for his second goal of the season after the winner at Brescia on Tuesday.

Dybala set up Ronaldo for the second with the Portuguese star's downward header beating Berisha, after he had been frustrated in two earlier efforts.

Berisha again proved solid as he denied Ronaldo in the hosts' final attack of the game, as the side from Emilia Romagna fell to their fifth defeat in six games.

Juventus goalkeeper Gianluigi Buffon meanwhile was unworried at the other end of the pitch as he made his 903rd club football appearance, surpassing the Italian record of 902 achieved by AC Milan legend Paolo Maldini.