"Everything Was So Delightful": Dhanashree Verma Shares Pic With Virat Kohli, Yuzvendra Chahal

Virat Kohli was all smiles as he posed for a picture with Yuzvendra Chahal and his wife Dhanashree Verma. 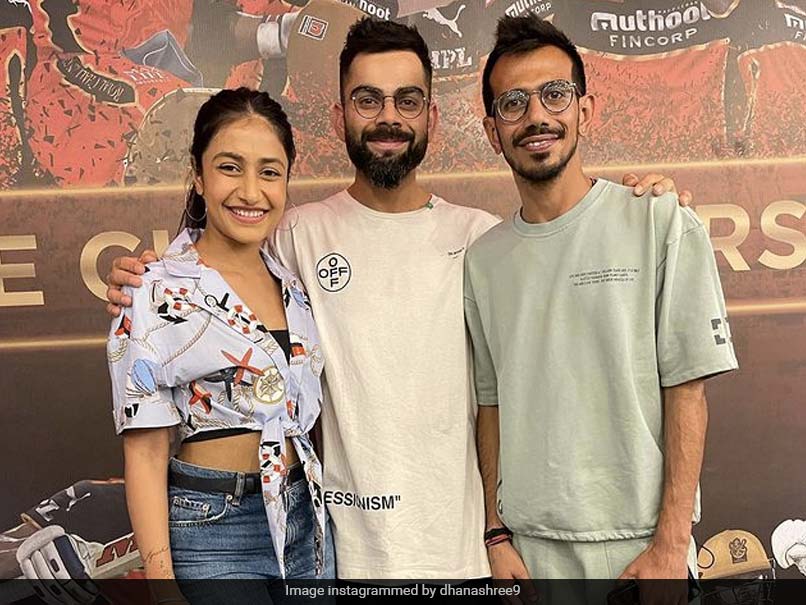 Yuzvendra Chahal's wife Dhanashree Verma on Saturday took to Instagram to share a picture with her husband and India skipper Virat Kohli, with all three of them smiling for the camera. Kohli was standing in the middle with Dhanashree and Chahal on his either side. Sharing her experience of meeting the RCB skipper, Dhanashree wrote: "This ones with the skipper & spinner From fun breakfast conversations to post match fun, everything was so delightful and a great exchange of knowledge #ayeayecaptain". Dhanashree Verma has been quite active on social media these days, with her Instagram feed full of pictures featuring various RCB stars and several dance videos.

Recently, she posted a video where she was dancing in a RCB jerseyon American rapper Soulja Boy's famous song 'She Make It Clap', which became an instant hit on social media and garnered over 5 lakh likes.

Yuzvendra Chahal's parents tested positive for coronavirus while he was playing for the RCB in the IPL 2021 and, in a recent interview, the leg-spinner said that he got to know about their condition a day before the tournament was postponed indefinitely.

The RCB spinner added that had the tournament continued, he would have taken a break as it was "difficult to focus on the game" while his parents were battling the dreaded virus, which has led to over 2 lakh deaths in the country.

Chahal said his father's oxygen level dropped to 85-86 and he was taken to the hospital. He further added that his mother won the battle against COVID-19, but his father is still positive but has been discharged from the hospital.

India skipper Virat Kohli is set to leave for the England tour where the team will play a World Test Championship (WTC) final against New Zealandand a five-Test series against England.

Chahal, yet to make his Test debut, is not part of the squad but is expected to travel to Sri Lanka for India's limited-overs series in July.