Dhanashree Verma posted a video where she is seen dancing in a Royal Challengers Bangalore jersey. 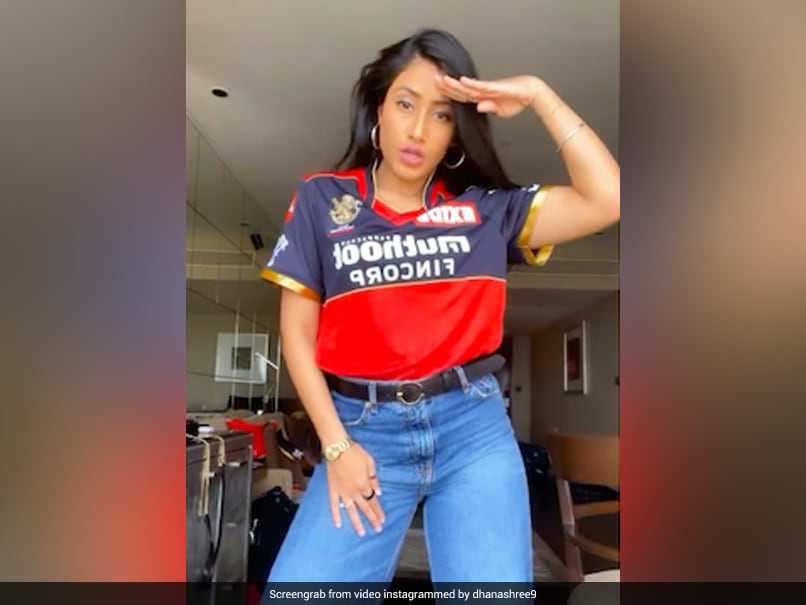 Dhanashree posted a video on Instagram showing off her dancing skills in a RCB jersey.© Instagram/Dhanashree

Royal Challengers Bangalore (RCB) leg-spinner Yuzvendra Chahal's wife Dhanashree Verma often keeps her fans entertained with her posts on Instagram. Dhanashree, a choreographer, on Tuesday showed her dancing skills, with a video of herself swaying on American rapper Soulja Boy's famous song "She Make It Clap." In the clip, Dhanashree is seen wearing RCB's red jersey and blue high-waist flared jeans. The 24-year-old also urged her followers to stay safe as the country continues to battle the second wave of COVID-19. "She make it clap. Something that was waiting to be uploaded. In this together. #staysafe," she captioned the post.

The clip got over 2 lakh views within four hours.

Earlier on the occasion of Mother Day, on May 9, Dhanashree also posted a dance video of her mom, Varsha Verma, along with several pictures featuring Chahal and cricketer Shikhar Dhawan.

"Mom, I have so many amazing pictures with you but this dance does justice to how you bring happiness into my life. Also, happy Mother's Day to all my super women out there. Not tagging them, as I'm quite possessive about these superstars. Thank you for everything," she wrote.

Before the suspension of the 14th edition of the Indian Premier League, Dhanashree was often spotted in the stands cheering for RCB and Chahal.

On May 4, the Board of Control for Cricket in India (BCCI) indefinitely suspended the IPL after several players and supports staff tested positive for COVID-19. When the tournament was called off, the Bangalore-based franchise was sitting at the third spot in the standings with 10 points in their kitty.

Earlier this year, during the player auctions, RCB had added five uncapped players in their squad along with three international signings. They spent big to get the services of Glenn Maxwell and New Zealand's Kyle Jamieson, and they had also roped in Australia's experienced T20 specialist, Dan Christian.

Yuzvendra Chahal Cricket
Get the latest updates on SA vs IND 2021-22, check out the Schedule and Live Score . Like us on Facebook or follow us on Twitter for more sports updates. You can also download the NDTV Cricket app for Android or iOS.