Daniel Lawrence hit the ball really hard but Tim David jumped in air to complete the catch with utmost ease. 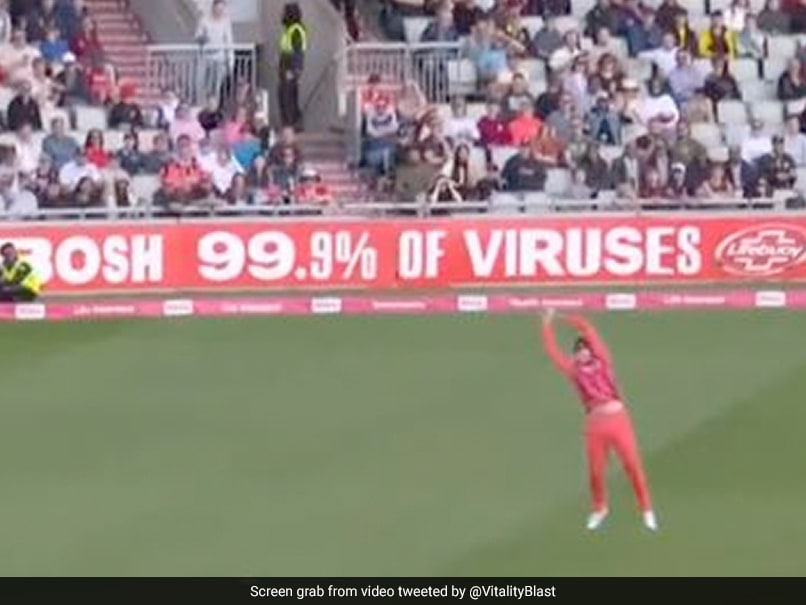 Apart from batting and bowling in cricket, fielding is also an area which has seen great development over the years. What could have been termed a special catch a decade ago is now being treated as a usual task. From boundary line catching to fielding inside the 30-yard circle, the players give it their all in a bid to keep their team ahead in the game. Tim David's catch to dismiss Daniel Lawrence in the quarter-final match between Lancashire and Essex in the ongoing T20 Blast is a telling example of how the cricketers have raised the bar of fielding over the years.

Lawrence tried to hit a half volley from outside the off stump over the mid-on fielder for a boundary but David's catch poured cold water on his plans. Lawrence shuffled in his crease to hit the ball really hard but David jumped in air to perfection and completed the catch with utmost ease.

The match between Lancashire and Essex was being played at the Emirates Old Trafford in Manchester. Lancashire won the game by seven wickets to advance to the semi-final of the tournament.

Essex posted 161/5 in 20 overs batting first. Michael Pepper scored 36 off 28 while Paul Walter contributed to the team's cause with an unbeaten 34 off 27.

Lancashire will play the semi-final match against Yorkshire on July 16. Yorkshire advanced to the semi-final after defeating Surrey in a one-run thriller that went till the last ball of the game.

Comments
Topics mentioned in this article
Cricket Tim David Dan Lawrence
Get the latest updates on IPL Auction 2023 and check out  IPL 2023 and Live Cricket Score. Like us on Facebook or follow us on Twitter for more sports updates. You can also download the NDTV Cricket app for Android or iOS.