Matthew Wade's freak catch during a Sheffield Shield match was a new high in teamwork. 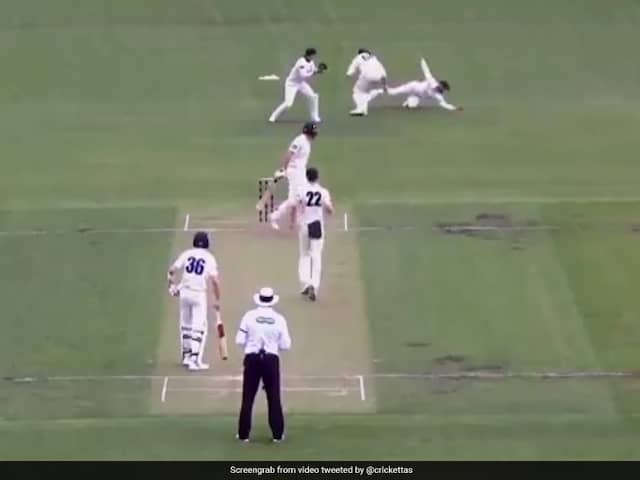 Matthew Wade dived to his left to take an extraordinary one-handed grab and salvaged the situation.© Screengrab: @crickettas

In a team sport like cricket, co-operation needs to run parallel with individual brilliance for bringing success to a group. Although we have seen some shining examples of teamwork over the years, Australian Matthew Wade's freakish catch in the Sheffield Shield will definitely rank among the best. During a match between New South Wales and Tasmania, Wade turned an almost dropped catch into one of the best catches ever, taking teamwork in cricket to a whole new level at Blundstone Arena in Hobart.

Watch the catch before we go on about magical it was

Tasmania quick Jackson Bird lured New South Wales opening batsman Daniel Hughes into playing at a delivery outside off stump. As expected, the Blues opener edged the ball that went flying to the slips.

Alex Doolan, stationed at second slip, almost caught the ball but somehow it wriggled through his fingers.

Then Matthew Wade, fielding at first slip, put his wicket-keeping reflexes to best use and claimed an unbelievable catch.

The skipper dived to his left to take an extraordinary one-handed grab and salvaged the situation.

"What a catch that was at first slip," one commentator exclaimed.

"Doolan should have got that one but just the reflexes of the wicketkeeper who is now at first slip... I call him Superman and there's a good reason why. Matthew Wade does it all!"

Recently, Matthew Wade notched a brilliant century for Tasmania in a losing effort against Western Australia to reignite his Ashes bid.

Matthew Wade Cricket
Get the latest Cricket news, check out the India cricket schedule, Cricket live score . Like us on Facebook or follow us on Twitter for more sports updates. You can also download the NDTV Cricket app for Android or iOS.