"Three Of Us Always Tried Our Best To Entertain": Shane Warne Posts Picture With Sachin Tendulkar And Brian Lara 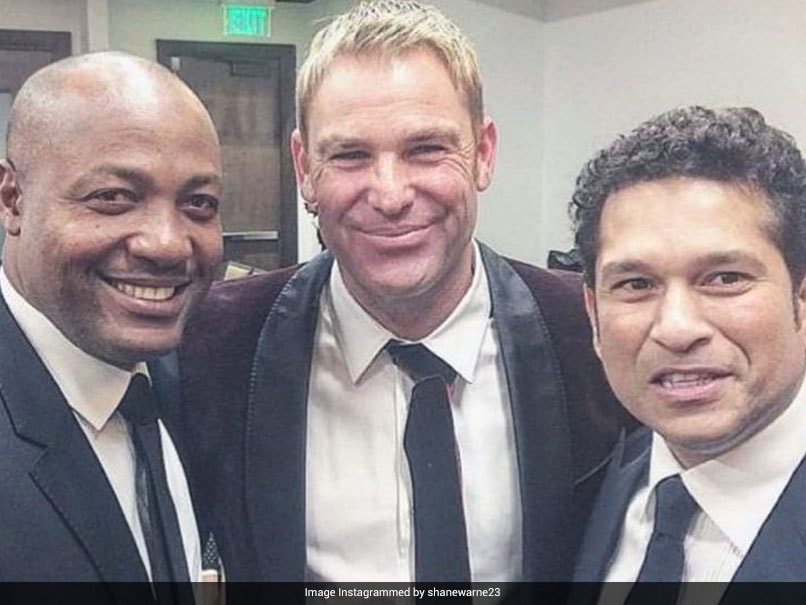 Former Australian leg spinner Shane Warne on Tuesday posted a picture with on-field rivals and off-field friends, Sachin Tendulkar and Brian Lara, saying that the trio always did their best to entertain the fans. "Great battles on the field and great friends of the field! The three of us always tried our best to entertain and play the game in the right spirit, plus inspire people @sachintendulkar @brianlaraofficial," Warne caption the picture on Instagram. The post garnered more than 15k likes within an hour of posting.

The cricketer turned commentator was a force to reckon with during his playing days. He's the second highest wicket taker in Test cricket. He picked 708 wickets in just 145 Test matches for Australia at an impressive average of 25.42. Warne is only behind Sri Lankan great Muttiah Muralitharan.

He also picked 10 ten-wicket hauls and 37 fifers in the longest format of the game. Other than ripping apart the opposition's batting order, Warne also contributed with the bat on many occasions. He has scored 3,154 runs in red-ball cricket with the help of 12 fifties.

He has picked 293 wickets in 194 One-day International (ODI) matches for Australia.

Warne also played in the Indian Premier League (IPL) for four years from 2008 to 2011. He guided Rajasthan Royals (RR) to IPL glory in the inaugural season. Warne was sensational with the ball that year, picking 19 wickets in 15 games for RR. Overall, he played 55 IPL games and picked 57 wickets at an average of 25.38.

Sachin Tendulkar Brian Lara Cricket
Get the latest updates on ICC Women's Cricket World Cup 2022 and IPL 2022, check out the Schedule , Live Score and IPL Points Table. Like us on Facebook or follow us on Twitter for more sports updates. You can also download the NDTV Cricket app for Android or iOS.