Shakib Al Hasan Made A Mistake, Cricket Board Will Stand By Him: Sheikh Hasina

Shakib Al Hasan was given a 2-year ban by the ICC, out of which one year has been suspended, for his failure to report corrupt approaches. 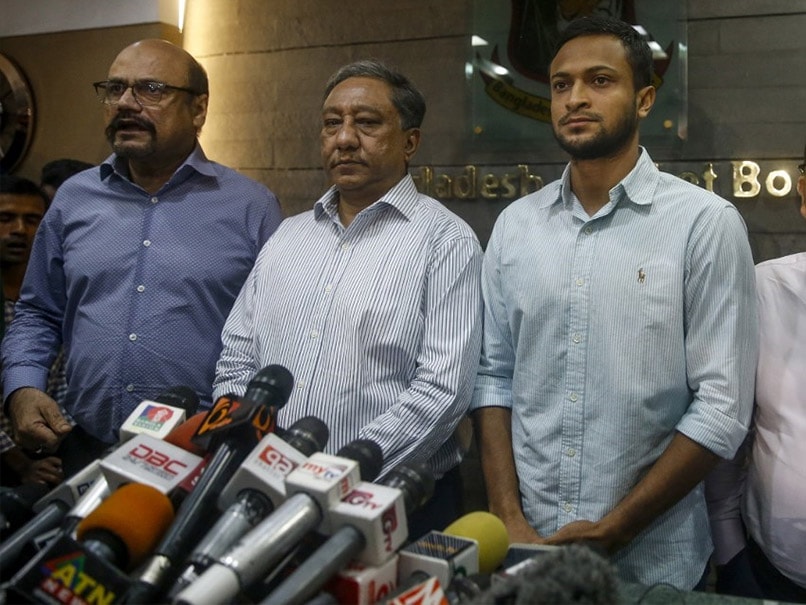 The Bangladesh Cricket Board has expressed its backing for Shakib Al Hasan.© AFP

Bangladesh Prime Minister Sheikh Hasina and the country's Cricket Board on Tuesday offered support to suspended all-rounder Shakib Al Hasan, insisting that his failure to report corrupt approaches was a mistake from which he will learn and bounce back as a wiser player. Shakib, Bangladesh's Test and T20I captain and the world's No.1 all-rounder in ODIs, was on Tuesday handed a two-year suspension by the ICC for failing to report three corrupt approaches, including one at the IPL, by a suspected Indian bookie, ousting him from the upcoming tour of India.

Twelve months of that ban is a suspended sentence which will come into effect if the 32-year-old fails to comply with the anti-corruption code of the world body.

The one-year ban that he has to serve will keep him out of next year's Indian Premier League (IPL) and also the World T20 to be held in Australia from October 18 to November 15 the same year.

"It's clear that Shakib has made a mistake and he's realised that," Hasina was quoted as saying by bdnews24.com.

"There's nothing much the government can do about the ICC's decision but BCB will stand by him," she added.

The ban comes as a huge blow for Bangladesh cricket ahead of their much-anticipated tour of India, which comprises three T20 Internationals and two Tests, beginning with the shortest format games on November 3.

The Bangladesh Cricket Board (BCB), however, said that doors will be opened for Shakib once his ban ends.

"We hope he will come back as a better and wiser cricketer and serve Bangladesh for many more years when his sanction will be over," BCB said in a statement.

"During the suspension the BCB will continue to support his efforts at returning to cricket. The BCB respects the ICC's decision and shares similar sentiments against corruption in cricket."

Shakib was spoken to by the ICC's Anti-Corruption Unit in January and August this year and he failed to report the approaches made to him by "an individual known to the ACU and suspected of involvement in corruption in cricket, Deepak Aggarwal."

The ICC said Aggarwal had asked Shakib to provide information on team composition and strategy on three separate occasions, one of them being April 26, 2018 when his IPL franchise Sunrisers Hyderabad was to take on Kings XI Punjab. Sunrisers won the game by 13 runs.

Shakib had "accepted three charges of breaching the ICC Anti-Corruption Code", something which went in his favour as he escaped the maximum punishment of five years for the offence.